The Hong Kong International Airport (HKIA) is one of the busiest airports in the world.  In 2011, there were more than 300,000 aircraft landing at and departing from HKIA[1].  In rainy season, cloud-to-ground (C-G) lightning associated with thunderstorms may pose threats to ramp operators, and passengers embarking or disembarking outdoor.  For the safety of the airport personnel and the passengers while minimizing disruption to the airport operations as much as possible, the Hong Kong Observatory cooperated with the HKIA and developed the "Airport Thunderstorm and Lightning Alerting System" (ATLAS).

ATLAS intelligently integrates real-time lightning location and weather radar data to provide amber and red lightning alerts automatically.  It uses a technique called "Tracking Radar Echoes by Correlation" (TREC) which calculates the motion vector, i.e. TREC vector, of every pixel on a radar image to predict the future lightning location.  The principle of TREC is summarized below.  The radar image is first divided into smaller boxes of equal size.  Two successive radar images (Time 1 and Time 2) are then compared.  Using Time 1 as basis, and by correlation, the corresponding box at Time 2 is found.  The relative positions of the paired-up boxes at Time 1 and Time 2 indicate the motion vector of radar echoes within the time period (Figure 1).  By extrapolation, it is able to calculate when the lightning will affect the airport.

When the amber lightning alert is in force, all non-essential ramp activities will be suspended.  When the red lightning alert is on, to protect the personnel on the apron, all outdoor activities on apron including aircraft refueling, embarking and disembarking of passengers, baggage as well as cargo handling will be halted until lightning is over, which may lead to delays in baggage reclaim. 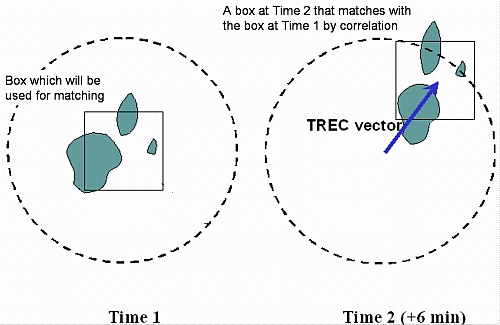