Who has Stolen Our Permafrost Tundra?

Who has Stolen Our Permafrost Tundra?

In July 2014, a big crater of around 30 metres wide was discovered in the Yamal Peninsula in northern Russia (Figure 1)[1].  The crater was located in the permafrost tundra area within the Arctic region.  Permafrost tundra generally refers to treeless plain areas where the soil underneath is either permafrost or permanently frozen soil.  In geology, permafrost is defined as soil that is at or below 0°C for at least two consecutive years[2].  Some researchers speculated that the crater was formed due to the explosive release of methane gas that was trapped inside the icy permafrost.  As the permafrost warmed up and started melting, gas pressure caused by the building up of methane increased until it was high enough to displace the overlying soil, forming the crater.  More craters were found in the Yamal Peninsula and other regions in northern Russia[3] subsequently. 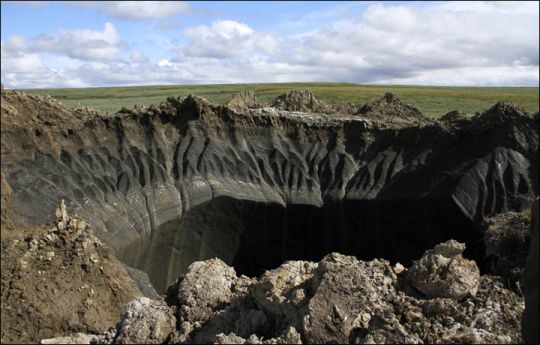 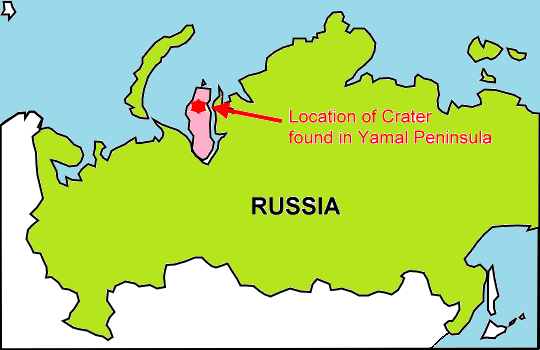 Figure 1   Photo showing the appearance of the big crater (up) which was found in the Yamal peninsula in northern Russia in July 2014 (down)
(Photo Credits: Professor Bogoyavlensky/The Siberian Times (http://siberiantimes.com/home/)).

Most permafrost is located at high latitudes near the Arctic and Antarctic regions.  It is also found at high altitudes (alpine permafrost) in lower latitude regions.  Permafrost occupies about 24% of the land in the Northern Hemisphere[4].  Permafrost distributes over vast areas of northern Russia, Canada, Alaska and Greenland.  In permafrost tundra, the vegetation is mainly composed of small shrubs, grasses, mosses and lichens.

One severe threat to permafrost tundra is global warming.  When the permafrost melts, it releases methane and carbon dioxide, both of which are greenhouse gases.  According to the Fifth Assessment Report made by the Intergovernmental Panel on Climate Change (IPCC), there is high confidence that climate change is causing the permafrost warming and melting in high latitude regions and in high-elevation regions[5].  As a result, the permafrost tundra areas are shrinking in size, which has been observed in some regions like the northern Russia and Tibetan Plateau[6].  The permafrost melting has caused soil above to sink and become uneven, triggering land subsidence.  This has significantly affected buildings, bridges, roads and railways that are built on the permafrost (Figure 2).  In addition, as the permafrost continues to warm, shrubs are invading the tundra area, replacing the lichens and other tundra vegetation there.  In Alaska, lichens are an important food source for caribous and the loss of lichens can lead to the decline in the growth and abundance of these animals[7]. 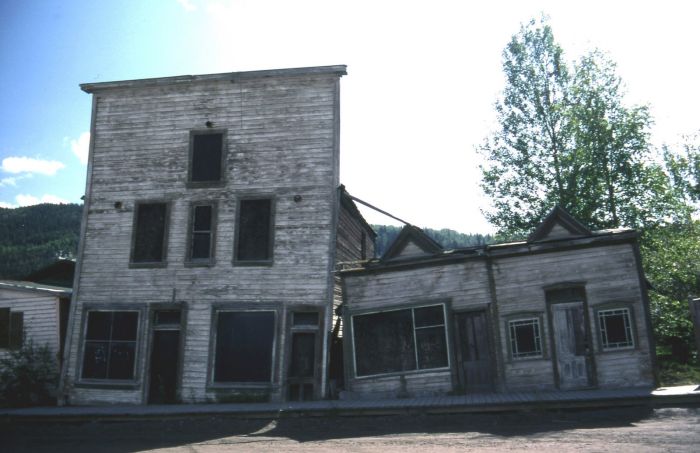 Figure 2   This damaged building in Dawson City, Canada that is caused by the melting of the permafrost underneath it.
(Photo Credits: Andrew Slater and the National Snow and Ice Data Center, University of Colorado, Boulder).

Though the reasons for the occurrence of the big crater in northern Russia are yet to be determined, scientists are worried about the amount of methane and carbon dioxide released to the atmosphere due to permafrost melting may further accelerate global warming, in particular methane is an even more powerful greenhouse gas compared to carbon dioxide.  The level of methane in the atmosphere has increased and exceeded the pre-industrial level by around 150% since 1750[8].  Currently, there are yet large uncertainties regarding the amount of methane and carbon dioxide released through this permafrost melting mechanism[9].  However, this rising trend has to be closely monitored taking into account the factor of permafrost melting.

To enhance upper-air measurements, HKO acquired a portable upper-air sounding system (PUPAS) in late 2014. PUPAS comprises a small receiver, an amplifier, a processor, a sonde checker, antennas and a tripod. Each component can basically be fitted inside a suitcase (Figures 2 and 3). The system is easily transportable by one or two persons to collect meteorological data (Figure 4) at different locations or even on board of a ship, thus enhancing the mobility and the application of upper-air sounding.