Will Easterlies Bring a Fine or Gloomy Day?

Will Easterlies Bring a Fine or Gloomy Day?

In autumn and winter, we often hear from weather reports that Hong Kong is under the influence of an 'easterly airstream'. Following the easterly airstream may be a fine or rainy day. What are the reasons for such a difference in weather?

As autumn and winter progress, the Sun becomes further away from the Northern Hemisphere. Hence, air temperatures drop over the Asian continent and an area of high pressure is formed. Monsoon is developed as air flows from this high pressure area to the ocean where the pressure is lower. The area of high pressure does not stay over the Asian continent over a long period of time, instead it moves from west to east across the continent. When the centre of the high pressure area is over the inland region to the north of Hong Kong, Hong Kong will be generally affected by a relatively dry northerly airstream. When the centre of the high pressure area moves to eastern China, winds in Hong Kong will generally turn to the east (Figure 1). In this case, the air mass reaching Hong Kong usually takes a track along the coastal areas of southeastern China. It can be dry or moist, depending on the time over the land or the sea. When the area of high pressure moves further east to Japan or Korea, local easterlies will persist. However, the air mass will become more humid as it traverses a longer sea track.

Figure 1   The northeast monsoon affecting the south China coast in autumn and winter may arrive from the north or the east.

A humid air mass favours cloud formation as it contains more water vapour. Let us take 27 November 2014 as an example. It was cloudy with a few rain patches in Hong Kong under moderate to fresh easterlies. The satellite imagery taken in the afternoon showed that a band of clouds was covering the eastern coast of Guangdong (Figure 2). The backward trajectory map showed that the air mass reaching Hong Kong originated from the seas near Japan and the Korean peninsula, and moved over the East China Sea and the Taiwan Strait (Figure 3). The humidity of the air mass increased as it traversed a longer sea track. As such, cloud and rain could be formed easily.

Figure 2   Visible satellite imagery at 2:30 p.m. on 27 November 2014. A band of clouds associated with the easterlies covered the coastal regions of eastern Guangdong (The satellite imagery was originally captured by MTSAT satellite of the Japan Meteorological Agency). 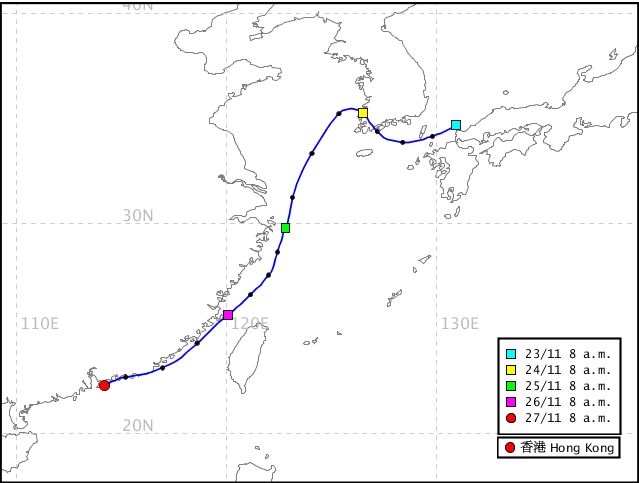 Figure 3   Backward trajectory map for 8 a.m. on 27 November 2014. The air mass arriving at Hong Kong on that day took a longer sea track, travelling across the East China Sea and the Taiwan Strait.

If the easterly winds affecting us are drier, it will be more difficult for clouds to form or sustain. Let us take 28 October 2014 as an example. Fresh to strong easterlies prevailed over Hong Kong and the Strong Monsoon Signal was in force for the whole day. However, the weather was generally fine in Hong Kong and over the coast of eastern Guangdong (Figure 4). Again, the backward trajectory map in Figure 5 can give us some clues. The air mass arriving at Hong Kong on that day originated from eastern China and tracked along the coast of southeastern China. Since the air mass came from the land and the sea track was short, its humidity was relatively low. Even if clouds could form, they were thin and would dissipate easily under insolation. Local weather was therefore generally fine during the day.

Figure 4   Visible satellite imagery at 2:32 p.m. on 28 October 2014. Under the influence of drier easterlies, it was fine over the coastal regions of eastern Guangdong (The satellite imagery was originally captured by MTSAT satellite of the Japan Meteorological Agency).

Figure 5   Backward trajectory map for 8 a.m. on 28 October 2014. The air mass arriving at Hong Kong on that day originated from inland area of eastern China and tracked along the southeastern coast of China.

From the above, we can see the characteristics of the easterlies that affect Hong Kong. It may originate from the land or travel along a longer sea track. Therefore, it can be dry or moist, bringing us fine or gloomy weather. It is also worth noting that if the easterlies are strong and moist, turbulence generated by the strong winds helps lift the air near the surface and favours the formation of clouds.