In Hong Kong, autumn usually begins from mid-September to late October.  Since autumn this year (2010), several surges of the northeast monsoon and their replenishments had affected Hong Kong.  Local temperatures dropped from over 30oC in summer to around 20oC.  Hot weather was replaced by mild conditions with winds turning from southwesterlies/southeasterlies to northeasterlies/northerlies.  One would find that cumulonimbus clouds and the associated showers became rare, while stratocumulus clouds would occasionally bring rain to the territory.  All these changes are related to the northeast monsoon.

From early to mid-September, the subtropical ridge(1) shifts southwards from 29-30 to 24-25 degree North (latitude) in concert with the weakening of the summer monsoon, while the cold high pressure system establishes itself over northern China.  Northerly winds at the 850 hecto-pascal (hpa) level (around 1500 metres above ground) spread from Changjiang region southeastwards, signifying the establishment of the northeast monsoon.  By the end of September (around the Autumnal Equinox), cold air from the north could ride over the Nanling mountain and intrude into Guangdong.  In early October, the subtropical ridge further retreats to the south, dry and cold air from the north could then frequently reach the coastal areas of southern China.  The daily mean temperature during this period goes below 23oC with dry and windy weather.

Apart from bringing about changes in winds and temperatures, the northeast monsoon can also affect tropical cyclones over the South China Sea.  If the northeast monsoon happens to meet the warm and moist air associated with tropical cyclones, windy and rainy weather could follow and is often called "Wet Cold Dew Wind" (WCDW) weather in Mainland China.  One such example is the heavy rain episode at Hainan in early October this year.  The heavy rain severely affected the harvest of late crop and vegetable.  The interval between two WCDW occasions is usually 6 to 8 days, being shorter in northern Guangdong and longer in the south.  During a WCDW occasion, the average daily rainfall is in general in the order of 30mm but it could be over 100mm in the close proximity of a tropical cyclone.  The northeast monsoon helps to intensify the rain-bands associated with the tropical cyclone and significantly raises the probability of daily rainfall over 100mm in the Hainan province and the coastal areas of Guangdong.  Similar weather affected Hong Kong between 10 and 11 October 2010.  At that time, the combined effect of a low depression area and the northeast monsoon brought over 50mm of rainfall to Shatin in Hong Kong (Fig.1).  The Strong Monsoon Warning Signal was in force during that period.  Although a low pressure area instead of a tropical cyclone is involved in this occasion, it is a good example of the interaction of the northeast monsoon with warm and moist air associated with the low pressure area, bringing an intense rainband to southern China. 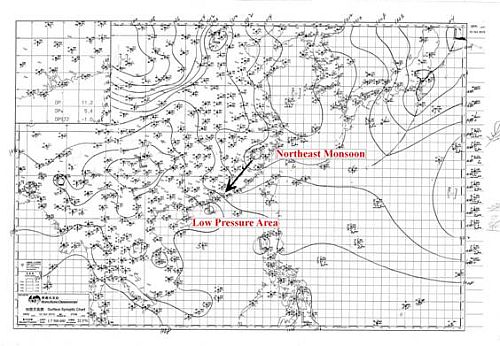 Apart from enhancing the rainbands of tropical cyclones, the northeast monsoon can also affect their movement.  Tropical cyclones over the South China Sea around the autumn equinox frequently makes landfall along the coastal areas of Guangdong and the Hainan province.  Typhoon Damrey (25/9/2005), Tropical Storm Francisco (24/9/2007) (Figures 2 and 3), and Typhoon Ketsana (28/9/2009) are a few examples. 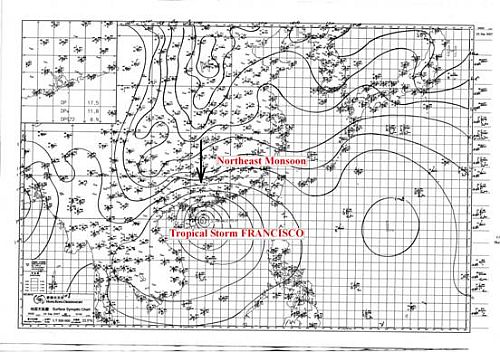 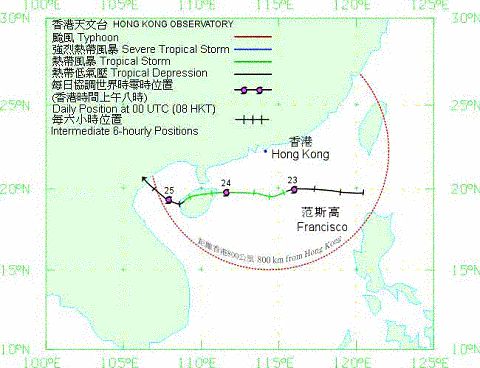 Tropical cyclone usually moves along the southern edge of the subtropical ridge in October and November, crossing the Bashi Strait or Balintang Channel or the northern part of Philippines and entering the South China Sea.  They would then be steered to the southwest by the strengthening northeast monsoon to affect the coastal areas of Guangdong.  When the tropical cyclone encounters the northeast monsoon, it usually moves on a westward track and makes landfall to the west of the Pearl River Delta region or coastal areas of Hainan.  However, there are exceptions and Severe Typhoon Megi in 2010 was an example.  Movement of tropical cyclones in summer is usually dominated by the steering flow at the 500hpa level (around 6000 metres above ground) while the role of the 850hpa level flow becomes more prominent in autumn.  Because of the different air flow at different altitudes, the track of a tropical cyclone is not straight forward.  Between 20 and 22 October 2010, the effect of the northeast monsoon to the movement of Megi over the South China Sea presented a challenge to weather forecasters (Figures 4 and 5).  It eventually took a northerly track and landed on the coast of Fujian, bringing severe damages to nearby areas.  Fortunately, there was  no major impact to Hong Kong. 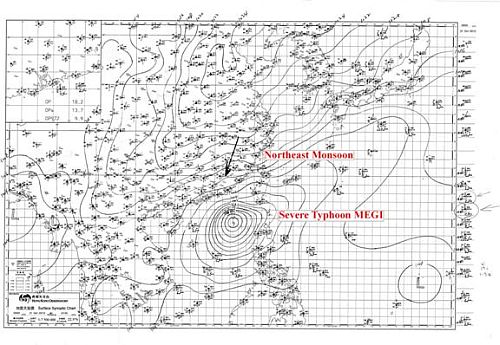 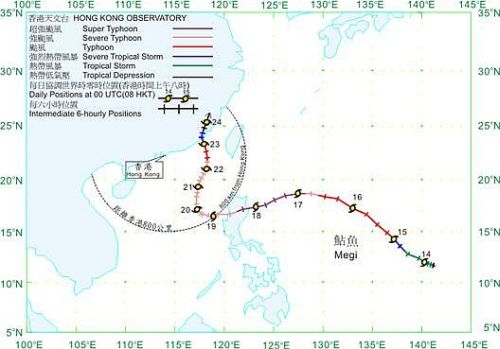