Winter monsoon - from the perspective of strong monsoon signal

Winter monsoon - from the perspective of strong monsoon signal

Winter monsoon normally blows from the north or from the east. The Strong Monsoon Signal (SMS) will be issued when winds associated with the monsoon are over or are expected to exceed 40 kilometres per hour anywhere near sea level in Hong Kong. Depending on the time of the season, and the juxtaposition of various weather systems, surges of cold air will arrive in Hong Kong as northerlies, northeasterlies or easterlies. The SMS will alert the public of the direction most exposed to high winds.  Below, we shall see how the wind direction given in the SMSs can shed light on some seasonal properties of the winter monsoon.

Table 1: Statistics of the wind direction as indicated in the SMSs issued by the Observatory during January 1971 to October 2010. The occurrence of strong northeasterly winds was much less frequent and therefore its statistics were not shown.

Table 1 reveals that in winter, the occasions of cold air arriving in Hong Kong from the north are about twice of that from the east; and that this ratio reverses towards the end of the season. There, in fact, is a reason for this. 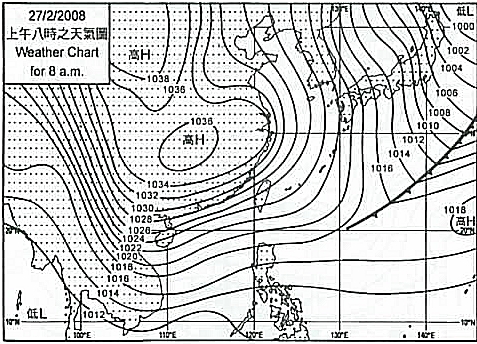 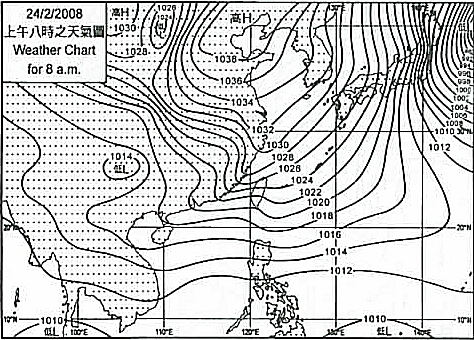 In winter, cold air accumulating over Siberia spreads outward, and the cold air mass moves to the east while it extends towards the south. Figure 1 and figure 2 show a typical surface weather map for a northerly surge, and an easterly surge, respectively on 27 February 2008 and 24 February 2008. The Observatory issued SMS on both days. With significant cold air outbreaks, surges extend southward rapidly and the high pressure area associated with the air mass will be situated to the north or northwest of Hong Kong, bringing northerly winds to the territory. When the outbreaks are weaker, or being affected by other weather systems, the cold air mass would have normally moved over to eastern China. The cold air will then reach the south China coastal areas passing through the Taiwan Strait, bringing easterlies to Hong Kong. Strong northerlies in winter will bring dry air and significant drop in temperatures due to large thermal difference between the coastal and inland areas. Whereas for easterlies, part of the cold air mass is over the seas and modified by the warmer sea waters, temperature drop is generally less and the air is less dry. However, because of less surface friction over waters, and the establishment of an easterly ridge over the coastal areas of southeast China due to terrain effect, winds from the east could easily reach strong force, necessitating the issuance of SMS even under weaker cold surges. 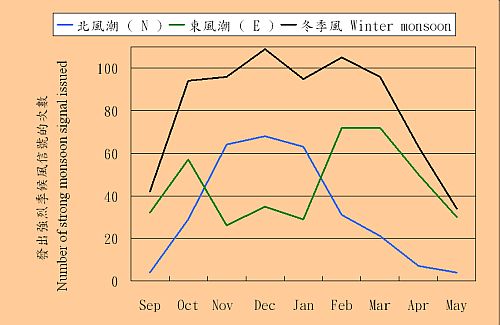 Even though the above analysis is based fully on the statistics of Strong Monsoon Signals and the northeast monsoon cases are not exhaustive, they are indicative guidance on the understanding of the process of strong cold air outbreaks over the South China coastal areas.