Why the winter monsoon in Hong Kong is generally called the northeast monsoon?

Why the winter monsoon in Hong Kong is generally called the northeast monsoon?

The primary causation of winds is due to the variations of temperature and pressure. Land and sea breezes are familiar weather phenomenon and these breezes begin to blow as a result of the diurnal temperature and pressure variations between land and sea. Monsoon winds have periodic alternation of direction and may be thought of as a very large-scale land and sea breezes, but having a seasonal characteristic: winter and summer, instead of diurnal.

The primary cause of the winter monsoon is the differential warming and cooling over land and ocean. In winter, air over the land cools faster with lower temperature than the air over the ocean. The temperature differences give rise to pressure differences which in turn generate air flowing from land to sea. With the arrival of winter surge, air temperatures over the mainland China are lower than the air temperatures over the South China Sea and give rise to pressure differences. The cold airmass from the high pressure area over the mainland China flows southwards towards the relatively low pressure area over the South China Sea due to the pressure gradient force. Winds will be diverted slightly due to the effect of the Earths rotation which is known as the Coriolis effect.  The Coriolis force always acts perpendicularly to the wind direction,  steering the air to the right, and finally the air spirals clockwise around the high-pressure system in the northern hemisphere.  In the southern hemisphere, the Coriolis force acts to the left and winds spiral anti-clockwisely around the high-pressure system.   Apart from the Coriolis force, winds near the Earths surface will be retarded by the effect of friction which is always opposite to the direction of air motion.

Under the combined effect of the pressure gradient force, the Coriolis force and friction, the prevailing winds in winter monsoon will generally be blowing from the sector between the north and the east over southern China, hence the term northeast monsoon. (see Figure 1). 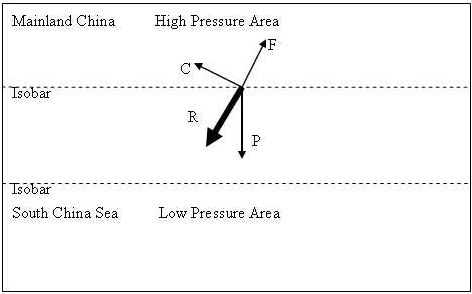 Figure 1:  Dot lines are isobars. R is the vector sum of pressure gradient force (P), Coriolis force (C) and friction (F). Prevailing winds over the southern China is generally from the northeasterly in winter monsoon