The word "gusts" often appears in the Thunderstorm Warning, the Tropical Cyclone Warning Bulletin or the Strong Monsoon Signal Special Announcement. It is a meteorological term to describe abrupt surge in wind speed or drastic change in wind direction. As high gusts bring safety risks and may cause casualties and economic losses [1], the Observatory reminds the public to stay alert of gusts in warning bulletins. Gust is not the same as sustained wind, and their difference can be quite significant. Figure 1 shows that when the No. 8 Northwest Gale or Storm Signal was in force during the passage of Tropical Cyclone Haima in October 2016, 10-minute sustained winds at 75 km/h, equivalent to gale force winds [2], were once recorded at Lau Fau Shan; while a maximum gust at 102 km/h, equivalent to storm force category, was recorded during the same 10-minute period at the same station – a difference of nearly 30km/h in speed! To understand such a difference, we must first distinguish between sustained wind and gust. Sustained wind is the wind speed averaged over a certain time interval, which is a consecutive period of 10 minutes according to the standard of the World Meteorological Organization. On the other hand, gust refers to the instantaneous wind speed, which is usually higher with larger fluctuations when compared with the sustained wind. 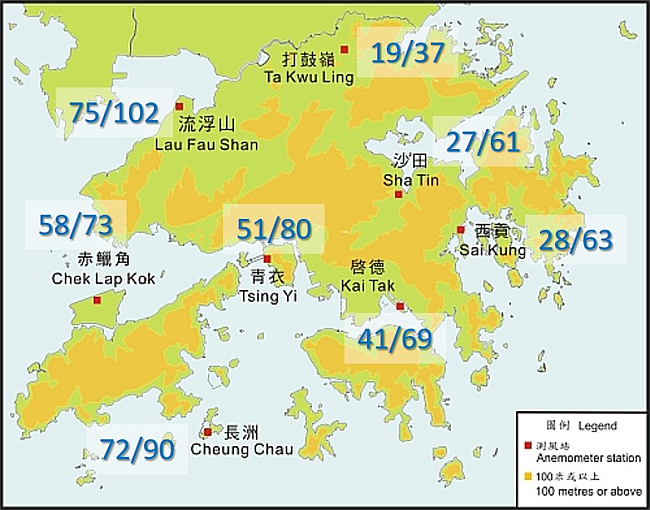 Sudden changes in gusts are mostly induced by thunderstorms, squall lines and strong monsoons [3][4]. With frequent convective activities in summer, the term "squally thunderstorms" often appears in weather reports to remind the public of abrupt increases in wind speed or drastic changes in wind direction due to thunderstorms. Sometimes special orography also enhances the formation of violent gusts in localized region. Despite the short duration of violent gusts, their elusive property can be astonishingly destructive, especially when people are unprepared for the soaring up of wind speeds. Violent gusts can bring about capsizing of small vessels on the sea and blowing down of trees, scaffoldings and even containers, can affect taking off and landing of aircrafts, and more seriously, can cause casualties. The "Shi Hu Feng" 1 occasionally come across by marine workers is one form of violent gusts.

It is therefore highly advised that when the Observatory has issued forecast, warning signals or Special Weather Tips on gusts, the public should avoid staying in open areas and secure all loose objects when it is safe to do so. Drivers using highways and flyovers should be alert to intense gusts. Please refer to the Observatory's webpage for information on real-time maximum gusts over the territory [5]. Be aware and stay safe!