A hole within clouds appeared over Hong Kong on 19 January 2015 (Figure 1). This phenomenon is known as "fallstreak hole" in meteorology. 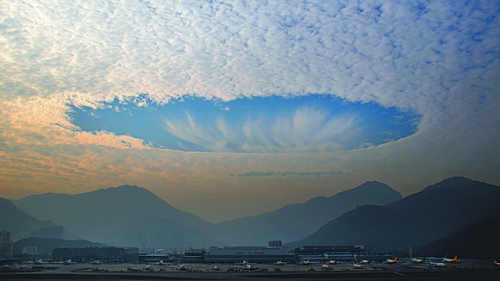 Figure 1   A photo of fallstreak hole taken by the Observatory's Weather Observer at the Hong Kong International Airport on 19 January 2015.

In some high clouds such as cirrocumulus or altocumulus, supercooled water sometimes exists due to a lack of condensation surfaces. As supercooled water is unstable, it may form ice crystals quickly when surrounding air cools down rapidly due to disturbances such as expansion of air caused by a passing aircraft. These ice crystals will grow larger as neighboring droplets freeze, and eventually gain enough weight to fall out of the clouds. The ice crystals melt and evaporate while falling, creating a hole with brush-like streaks, hence named "fallstreak hole".

Multi-functional Transport Satellite (MTSAT) of the Japan Meteorological Agency (Figure 2) and the all-sky camera of the Hong Kong Observatory (Figure 3) also captured the images of fallstreak hole over Hong Kong that day.

Figure 2   Satellite image showing a fallsteak hole over Hong Kong captured by MTSAT of the Japan Meteorological Agency on 19 October 2015.

Figure 3   Photo of fallstreak hole captured by the all-sky camera of the Hong Kong Observatory at Shek Pik.