Influence of Tropical Cyclones on Visibility in Hong Kong

Influence of Tropical Cyclones on Visibility in Hong Kong

Reduction in visibility is mainly caused by the absorption and scattering of visible light by suspended particulates.  In summer, although the visibility in Hong Kong is usually better than in other seasons, reduction in visibility often occurs when a tropical cyclone is situated in the vicinity of Taiwan.  According to a study by the Observatory, the causes of reduced visibility are associated with the change in the source of air mass, the convergence of horizontal and vertical airstreams as well as the low wind speed (see Figure 1). 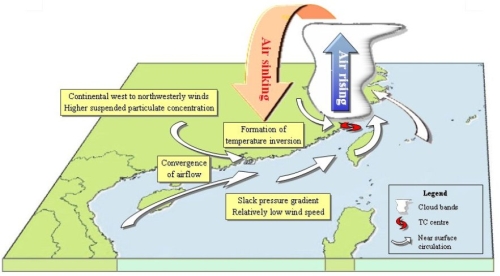 Figure 1 - Conceptual model of the occurrence of reduced visibility in Hong Kong due to a tropical cyclone near Taiwan.

Take Typhoon Haitang in 2005 as an example, when Haitang was moving in the vicinity of Taiwan on 19 and 20 July, the visibility in Hong Kong dropped significantly.  Figure 2 shows that on 14 July, when Haitang was still quite far away from Hong Kong, the air mass in Hong Kong was mainly from the relatively clean ocean.  However, with Haitang gradually approaching on 19 and 20 July, the outer circulation of the typhoon brought along air to Hong Kong from the mainland where human activities were high.  During the period when Haitang traversed Taiwan, the surface isobars near Hong Kong were slackened and hence the wind speed was low.  The outer circulation of Haitang also caused the convergence of the continental (west to northwesterly) airstream and the maritime (west to southwesterly) airflow near Hong Kong.  The air ascended near the centre of Haitang.  However, in places relatively far away from Haitang, such as Hong Kong, the air current was generally descending. Low wind speed and the convergence of horizontal and vertical airstreams hindered the 3-dimensional dispersal of suspended particulates and thus causing a drop in visibility.

Figure 2 - Track of typhoon Haitang and the backward trajectory of the air mass in Hong Kong during the period Haitang traversed Taiwan.