In "Fog Explained", the formation of fog is described.  Here we shall further illustrate the mechanism using commonly observed fog in Hong Kong as examples

When cold surge or northerly cold air gradually weakens, the approaching airstream which has traversed the ocean to the east or southeast of Hong Kong is relatively warm and humid.  When it moves over the underlying cooler water or land surface along the coast of Guangdong, the air temperature near the surface will gradually drop, resulting in condensation of water vapour into small water droplets with diameters of about a ten-thousandth of a centimeter.  They are carried (or advected, in meteorological jargon) by the east to southeasterly wind towards Hong Kong (Fig.1) and the coastal areas of Guangdong as a layer of fog (hence called advection fog) which is also commonly known as "sea fog".

Fig.1   Foggy weather affected the Victoria Harbour on 23 March 2009.(Photographed by the weather observer at the Observatory)

In spring, Hong Kong may be affected by airstreams from different origins at the same time (Fig.2). These airstreams are nearly saturated but with slightly different temperatures.  If the winds are not strong, these competing airstreams will mix at the interface, forming water droplets by condensation and resulting in another common kind of fog called mixing fog.

A typical case can be seen on 16 February 2011. That morning, a humid easterly airstream brought some mists and light rain to Hong Kong.  The visibility was about 2000-5000 m. Around noon, a weak northerly airstream started to affect the western part of territory (Fig.3). With the penetration of the cooler northerlies, the temperature dropped immediately (Fig.4).  Since the air became saturated and the water vapour condensed due to mixing of air coming from the north and the east, mixing fog formed. The fog caused rapid drop in visibility over the waters in western part of Hong Kong and near the Hong Kong International Airport to about 1000 m within a couple of hours (Fig.5). However, the eastern territory of Hong Kong was only slightly affected. 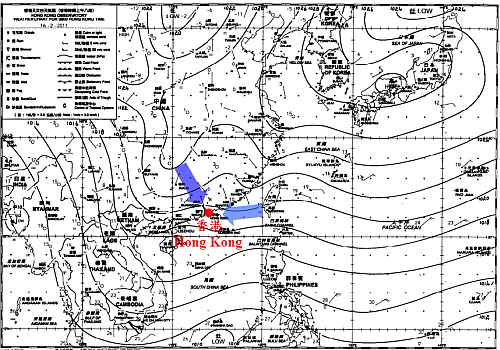 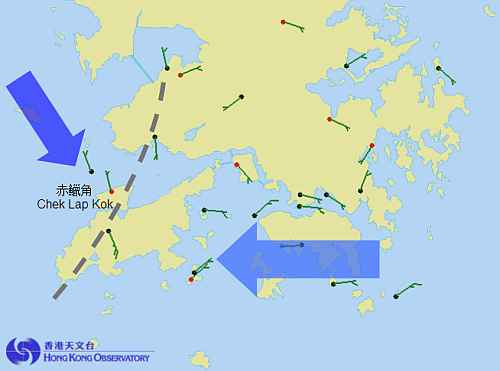 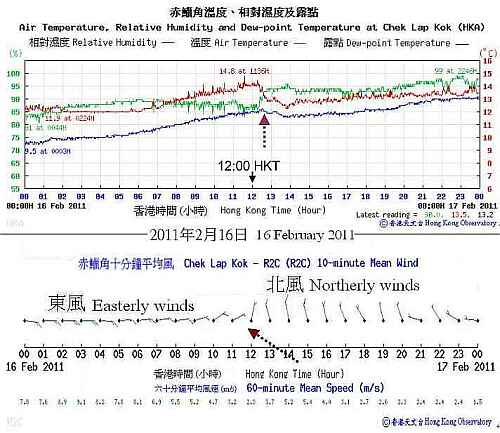 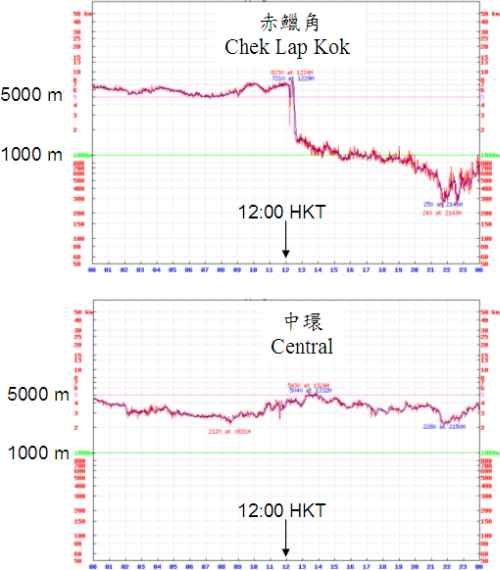 In valleys and low-lying regions, during nighttime of winter and spring with cloudless sky and calm wind, the layer of air adjacent to the surface is cooled as the temperature of Earth surface drops more rapidly due to radiation cooling effect.  The air near the Earth surface becomes cooler than the air immediately above it, causing the atmosphere to become more stable.  If the air is sufficiently moist and cools to its dew point, condensation occurs and radiation fog forms (Fig.6).  Before dawn, the surface temperature reaches its minimum and results in thick radiation fog.  Upon sunrise, the Earth surface is gradually heated up, and the fog will begin to evaporate.  As the temperature continues to rise, the atmosphere will become less stable and radiation fog dissipates. 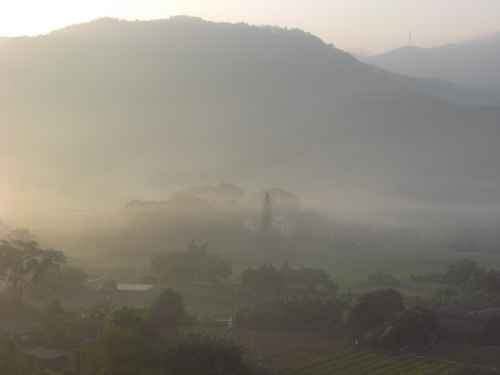 Fig.6   Radiation fog occurred in a morning at Sheung Shui. (By courtesy of the Mr. Chow Kam-ming, Vice Principal of the Elegantia College in Sheung Shui)