The south China snow storm in 2008

In early 2008, south China suffered from a severe snow storm. The snow storm occurred mainly in provinces like Guizhou, Hubei, Hunan and Jiangxi (Figure 1). Because of the relatively drier air mass in the north, precipitation was less in northern China than in southern China. Despite the colder temperatures, provinces in northern China was comparatively free of snow. There was extensive freezing rain in southern China (Fig.1), rendering the road surface icy and slippery, and causing traffic accidents or disruption. It also froze on power lines, significantly increased their weight and causing the power transmission tower to crash down. There were serious electricity blackouts in many cities.

Fig.1   The weather of southern China on 28 January 2008. (The weather symbols on the weather chart were used internationally based on "World Meteorological Organization Publication No.306 Part A".)

The formation of freezing rain

The formation process of freezing rain begins when snow flakes fall from clouds at high altitudes (Fig.2). When the snow flakes fall through a layer of warm air with temperature higher than the freezing point, they completely melt and form rain droplets. As the rain droplets continue to fall and enter a layer of air with subfreezing temperatures, the rain drops do not freeze instantly but become supercooled.  When the supercooled rain drops eventually reach any subfreezing object on the ground, they will freeze immediately.  This kind of precipitation is called freezing rain.

Fig.2  The formation of freezing rain (T is in degrees Celsius)

Freezing rain usually forms when a subfreezing air stream meets with a warm air mass. By virtue of their different densities, the subfreezing cold air stream undercuts the warm air stream which is displaced aloft (Figure 2). An inversion layer will then be established.  Lack of condensation nuclei in the atmosphere is also an essential condition for freezing rain to form.

How did the snow storm occur?

The extensive snow storm was related to the La Nina event, during which sea surface water over the central and eastern tropical Pacific was persistently cooler than normal. This caused the atmospheric circulation to deviate from its normal pattern, and specifically, outbreaks of cold air became more frequent. While the cold air stream spread towards the south incessantly, warm moist air originated from the South China Sea and even as far away as in the Indian Ocean was continually transported to southern China.  The cold and warm air streams met over southern China and in the areas south of Chang Jiang, causing long period of precipitations including freezing rain and snow. As time progressed and the snow storm continued to unfold, a calamity was in its making.

Why was the weather cold and cloudy in Hong Kong during the same period?

The formation of the snow storm of southern China bears some common features with the cold and cloudy weather in Hong Kong starting mid-January 2008. The upper air temperature and wind direction over Hong Kong on 29 January 2008 would provide the clues. An inversion appeared below 800m (Fig.3) over Hong Kong, where the temperature increased with height. Hence, it was warm and moist near the top of the inversion but cold below the inversion. Figure 4 shows the winds below 800m over Hong Kong. Warm and moist southerly winds appeared aloft while cold northerly winds appeared at low altitudes. In fact, the inversion was more or less a permanent feature during the spell of cold and cloudy weather in Hong Kong. 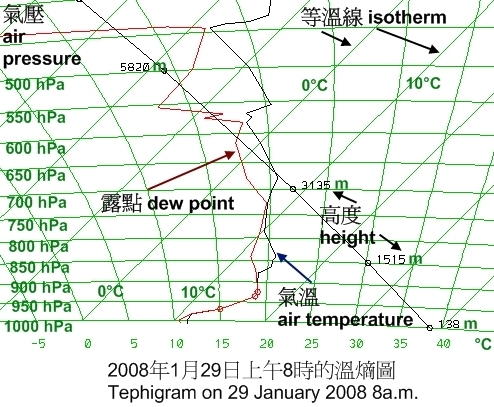 Fig.3  An inversion appeared below 800m above Hong Kong. (It was warm and moist in the upper part of the inversion and cold below.)

Why was there no freezing rain in Hong Kong?