Why Is There More Rain in Tai Mo Shan?

Why Is There More Rain in Tai Mo Shan?

The rain season in Hong Kong is usually from April to September, with moisture mainly coming from the seas south of us.  Although Hong Kong is a small place, it is hilly with few flat land.  The major range of hills runs from the northeast to the southwest.  Situated in the central part of the New Territories, Tai Mo Shan is the highest peak in Hong Kong.  Lantau Peak (Fung Wong Shan) and Sunset Peak (Tai Tung Shan) on the Lantau Island, together with Ma On Shan in the eastern part of the New Territories are also the major peaks in Hong Kong.  According to the annual mean rainfall distribution map of Hong Kong (Figure 1) that was plotted using the rainfall recorded by rain gauges over the territory, the regional difference of annual mean rainfall is large.  This is closely tied to the terrain of Hong Kong.  For example, the annual rainfall recorded at Waglan Island is less than 1,800 millimetres while that at Tai Mo Shan is over 3,000 millimetres.  The excessive rain over hilly area is called orographic rain. 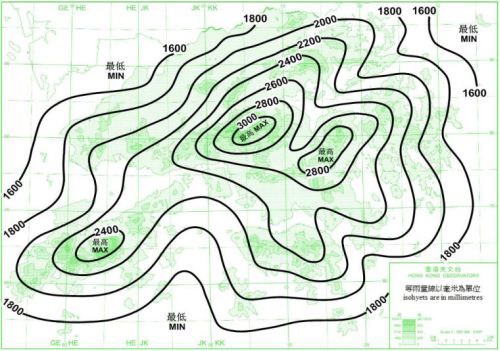 When moist air hits a hill, it is blocked and forced to lift up along the slope.  Owing to decrease in air pressure with height, the ascending air mass expands in reduced air pressure.  This process consumes energy and the temperature of air mass will drop.  When the air mass cools gradually to the dew point temperature, it will become saturated and condense, turning into cloud and rain.  This kind of rain is called orographic rain (Figure 2).  This explains why the rain gauges located near the hilly areas of Hong Kong record more rainfall.  Generally speaking, orographic rain mainly occurs over the windward side of the hill.  On the leeward side, the air mass has already lost much of its moisture as precipitation.  It will become warmer and drier as it descends along the slope on the leeward side, resulting in less rainfall on the leeward slope.  However, as the hills in Hong Kong are not very high, there is still enough moisture for precipitation even after the orographic clouds have climbed over the ridge.  Therefore, the rainfall on the windward slope does not differ much from that on the leeward slope.  Nevertheless, the difference between the rainfall recorded over hilly region and flat land is significant.

Figure 2   Illustration of the formation of orographic rain

It is worth noting that in some days without rain, the rain gauge at Tai Mo Shan sometimes records about 1 millimetre of daily rainfall.  This is probably due to the condensation of moisture in the atmosphere or in the low clouds directly on the rain gauge.  However, this only accounts for a very small portion of the annual total rainfall.