The Looks of Water in Autumn

The Looks of Water in Autumn

In hot and moist summertime, we always look forward to an earlier arrival of autumn to bring us a pleasant relief. Autumn is the transition between summer and winter. Although there may still be occasional rain episodes, the weather is generally cool and dry. "Water" plays a less active and changeable role than it does in spring or summer. Let's see why the weather in autumn is usually fine and clear from a meteorological point of view.

In Hong Kong, autumn is less pronounced than other seasons. However, in most parts of China including Beijing, Shanghai, Wuhan, Lanzhou, Urumqi and Lhasa, autumn is full of character. According to climatological record of these places, autumn is comfortable and on average rainy days are much fewer than those in the summer. After a rainy summer, the dust and impurities in the air are washed away. According to the physics of scattering, when the amount of dust and larger particles in the air is reduced, violet and blue light of shorter wavelengths will be scattered more than red light of longer wavelength (Fig.1). This makes the sky appear blue.

In summer, Hong Kong is mainly affected by a southerly airstreams from the sea and the weather is generally humid with rain. Towards autumn, the increasing prevalence of the northeast monsoon originating from the inland areas causes the atmosphere to dry out and the rainy season over northern, central and eastern China comes to an end. The dry and cold air mass over northern China intensifies and spreads southward in phases, displacing the warm and humid air prevailing in the summer. As a result, clouds and moisture are cleared up and the weather becomes fine and conditions comfortable.

Even in autumn, there can be disruptions to the pleasant weather, especially when weather systems are weak in intensity. The prevalence of weak and dry northeast monsoon brings to Hong Kong abundant sunshine, which in turn induces significant temperature contrast between land and sea, leading to the formation of land and sea breezes. The small scale moisture-laden sea breeze converges with the prevailing northeasterly winds. When the sea breeze strengthens in the afternoon, the convergence zone moves inland. Thunderstorms and showers would then occur over inland areas. On the contrary, when solar heating vanishes at night, temperatures over land area drop more rapidly due to radiation cooling. Sea breeze would subside and give way to land breeze. The convergence zone moves from inland towards the coast with the land breeze and brings showers to Hong Kong and the adjacent coastal areas (Fig.2). 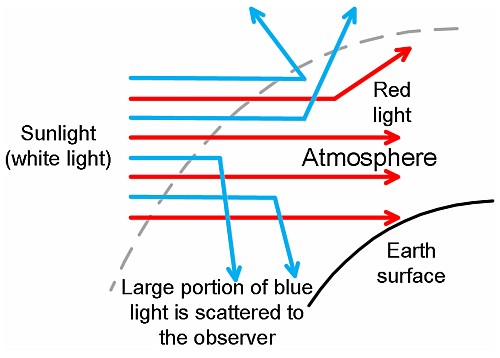 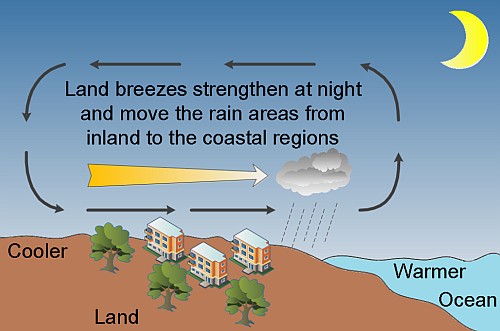