After a clear winter night in northern China, the grass is usually covered with a layer of frost crystals, sparkling under the rising sun in the early morning. People in northern China often call this phenomenon as "the descent of frost". In the Chinese lunar calendar, there is a solar term called "Frost's Descent" on the 23rd or 24th day of October each year. It is the last solar term in autumn.  After this day, the activity of cold air becomes frequent over northern China and frost is likely to occur in the early morning. "Frost's Descent" is a bit misleading because although rain and snow fall from the sky, we never see frost falling from the sky - it forms near the ground.

Frost is ice that forms directly from water vapor in the ambient air and deposits on a cold surface. It is formed when the surface of an object is cooled to below the freezing point of water.  Frost consists of spicules of ice which grow out from the surface of an object. The formation of frost is an example of deposition, which means that water vapor is directly frozen into ice crystals without going through the liquid phase. There are many different types of frost depending on how it forms and the appearance of frost crystals, such as hoar frost, advection frost, frost flowers, etc.

In Hong Kong, hoar frost is the most common type of frost in winter. Hoar frost refers to the white ice crystals deposited on the ground or exposed objects such as the rim of leaves, cable masts and even car windshields. It is formed due to radiation cooling at night. So hoar frost is also known as radiation frost. With clear sky and light wind conditions, the ground or exposed objects can be cooled to below the freezing point by radiation cooling at night, and hoar frost will then form on the object surfaces below freezing point. The effect ofradiation cooling depends both on cloud amount and wind force; cloudy or windy conditions are not conducive to the formation of frost overnight. Air temperatures recorded by the Observatory are normally above 0oC when frost occurs in Hong Kong, since observations are taken at about 2 meters above the ground, where it can be warmer than ground temperature. 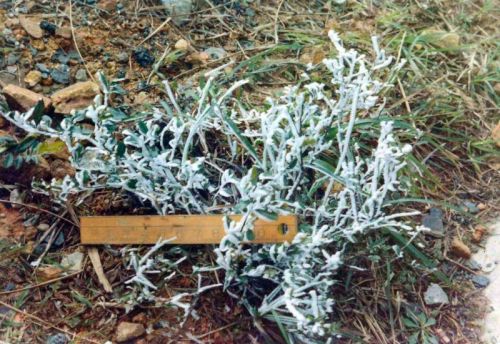 Hong Kong's climate in winter is seldom bitterly cold. The minimum temperatures fall below 10oC in urban areas rather occasionally. However, it is not uncommon for frost to occur on high ground and in the northern part of the New Territories. Figure 2 shows the number of days with reported frost in Hong Kong since 1955. Frost is usually observed between December and February, which is the coldest period in Hong Kong. As the tissues of crops covered with frost can be damaged by freezing temperatures, ground frost is an economic hazard to people growing fruit and vegetable. Therefore, the Observatory issues the frost warning to farmers whenever ground frost is likely to occur. 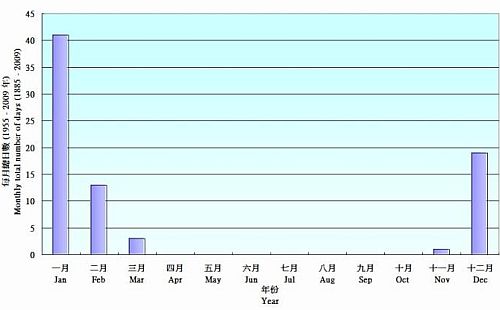