A rare spectacular sight of rime in Hong Kong

A rare spectacular sight of rime in Hong Kong

A severe winter monsoon affected southern China between 15 and 18 December 2010. On December 16, the weather in Hong Kong was cold with some rain. Winds were fresh to strong northerlies, occasionally reaching gale force on high ground. Figure 1 shows the weather chart at 8 a.m. on December 16. The temperature at the Hong Kong Observatory dropped to 8.1 degrees in the morning while that at Tai Mo Shan fell rapidly to below the freezing point (0oC) (see Figure 2). As the weather was cloudy with rather strong winds on high ground (see Figure 3), the temperature at Tai Mo Shan fell from about 3 degrees at mid-night and lingered around 2 degrees below zero during the day (see Figure 2). During that period, there were spectacular rime formations near the Tai Mo Shan weather station, the sight of which were captured by Observatory staff. 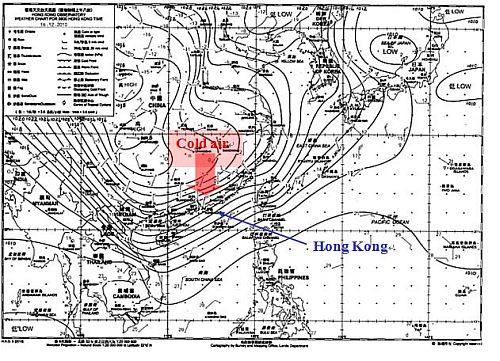 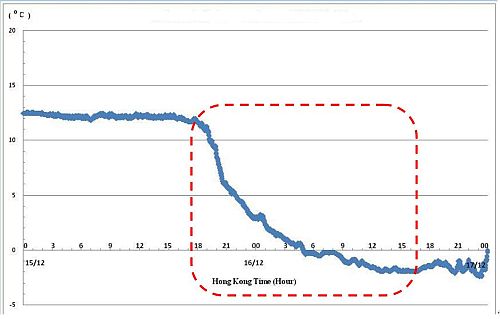 Figure 3  Variation of wind direction and speed with time at Tai Mo Shan on 16 December 2010. 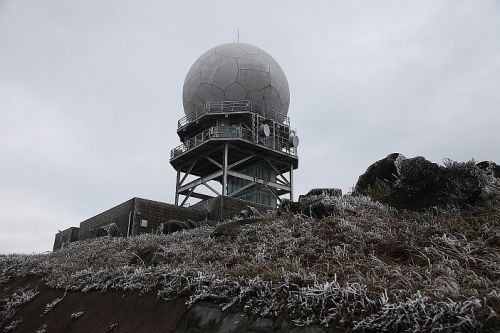 Rime and frost are formed under different weather conditions (cloudy or windy days do not favour the formation of frost (see another article on frost)). Under very cold weather conditions, when tiny, super-cooled water droplets in fog come into contact with solid objects at a temperature below the freezing point (0oC), they will freeze on the outer surface of the objects to form a deposition of white, rough ice crystals, called "rime"  (see Figure 5).

Figure 5  Ice feathers of rime formed on a ring of stainless steel cable.

On that morning, it was cold and humid with low-hanging clouds at Tai Mo Shan just after raining.  Sufficient amount of moisture together with strong winds favour the formation of rime (see Figure 6). 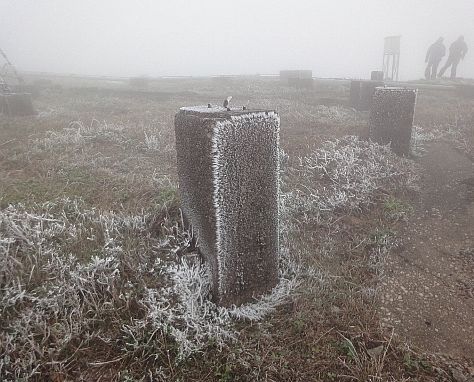 Figure 6  On that morning, rime (see the column of rock in front) starts to form when low-hanging clouds or fog cover Tai Mo Shan.

Water droplets from fog usually freeze to form white ice crystals to the windward side of tree branches or rocks where they grow gradually to ice feathers of rime (see Figure 7).  The length of the ice feathers of rime ranges from several centimeters to tens of centimeters, some even clump together or completely cover a shrub on the ground. 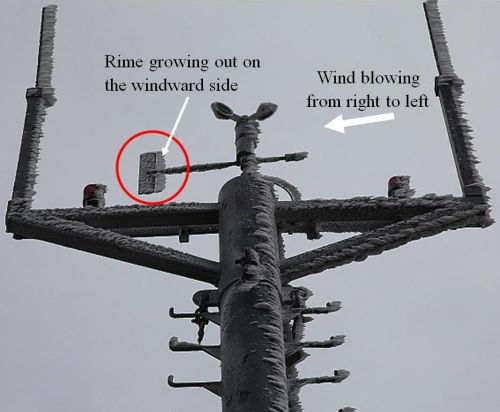 Rime can have a variety of beautiful forms, making a magnificent decoration of snowy trees and silvery flowers with dazzling grace for the cold winter (see Figure 8). 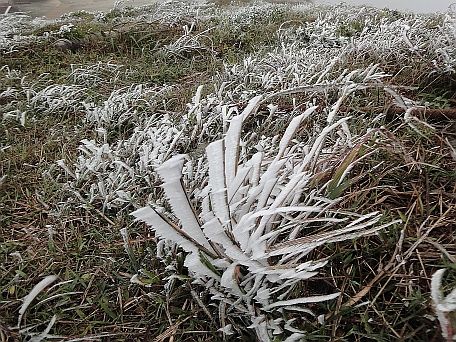 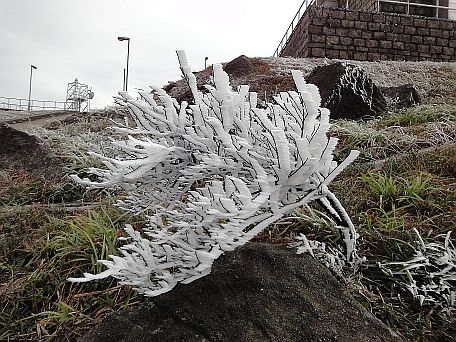 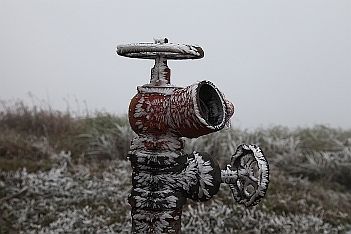 In fact, rime is not un-common in southeastern China and Taiwan. In this region, it is possible to appreciate the dazzling grace of rime on high ground during the passage of severe winter surges. According to its distribution, rime is commonly found on the windward side of hill slopes. Nevertheless, the beautiful shapes of rime cannot sustain for a long time as it would melt rapidly and disappear without trace under the sun. The moist environment at the hill top, together with the thick clouds and strong northerlies that help maintain the temperature at Tai Mo Shan to below the freezing point (see Figure 2),  provides a good weather condition for the growth of rime on that day. With all these favourable conditions, the Observatory staffs were lucky to have captured the spectacular views of rime in Hong Kong on December 16.