Why does a Thunder Sound the Way It does?

Why does a Thunder Sound the Way It does?

In this series, we will explore the science of thunder and lightning from different angles. To start with, let us talk about the peculiar sound of thunder.

Thunder is the sound generated by lightning. The electric current in a lightning bolt heats the surrounding air to more than 20,000 degrees Celsius within a few milliseconds. This is even hotter than the surface of the sun. The sudden heating causes the surrounding air to expand violently and creates big sound waves, like what happens in a bomb explosion, along the entire length of the lightning bolt.

We usually hear a loud boom followed by several seconds of rumble. The first loud sound comes from the part of the main lightning bolt closest to us and the following rumbles come from those that are farther away. The sound may bounce off the low hanging clouds, nearby hills or buildings to create a series of low and continuous echoes.

Lightning also occurs inside a cloud. Since this type of lightning tends to be less powerful than cloud-to-ground lightning and much higher up in the sky, the sound of thunder is generally softer. 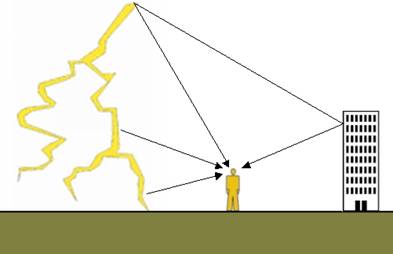 Sound from different parts of a lightning bolt reaches our ears at different times, either directly or after reflection.(Objects in the diagram are not to scale)