Why Lightning Looks the Way It does - Crooked and Forked?

Why Lightning Looks the Way It does - Crooked and Forked?

In the first episode we explored why thunder roars.  As thunder is always accompanied by lightning, lets now take a look at the spectacular display of lightning.

The ionized air provides one or more lightning channels for the negative charges in the cloud to rush towards the ground. (The diagram was produced by Mr. L.S. Lee.  Objects in the diagram are not to scale.)

Lightning is a release of electric charges from a cloud to the air and then to the ground.  Air itself is an electrical insulator but the abundance of charges inside the cloud can induce a very high voltage across the cloud and the ground.  This causes the air to become ionized and conductive.  A channel of ionized air emerges from the cloud at first and propagates towards the ground in steps, each of typically tens of meters long.  The propagation of the lightning channel follows a path of the least resistance, which is not a straight but a zig-zag line because impurity or moisture in the atmosphere causes the air to be ionized in different directions.  Sometimes the lightning channel finds more than one conductive path and branches out, giving lightning its forked appearance.

Among all the branches of the lightning channel, the one which first reaches the ground establishes a conductive path all the way from the cloud to the ground, as if there is a very long metal rod connecting them together.  There will then be a sudden and massive flow of electric current between the cloud and the ground and all the branches of the lightning channel will be lit up, giving a bright flash across the sky. 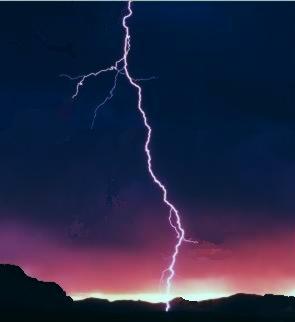 A forked and zig-zag lightning bolt (The picture was produced by Mr. L.S. Lee)