A chat of very hot weather

A chat of very hot weather

When we talk about weather hazards, what come first to our mind are tropical cyclones, heavy rain, thunderstorms etc.  However, sunny weather may also evolve into heat waves, posing threat to the public.

High temperature is a natural weather phenomenon, whereas heat wave is a prolonged period of excessively hot weather.  It may have negative effects to human beings, animals and plants when they experience difficulties in adaptation.  A notable example is the heat wave across Asia and Europe in 2007.  In June that year, temperatures in India and Pakistan soared to near 50 deg C, resulting in over 200 deaths in these two countries.  The heat wave then propagated to southeastern Europe, where the maximum temperatures generally rose above 40 deg C.  The extreme temperature caused a total of several tens of deaths in Cyprus, Austria, Romania and other nearby countries.

There is no universal definition of heat wave.  Since there is a great difference in the climate between various regions of the world, the weather services in different countries will formulate heat advisories or warnings with respect to their own local climate.  Take Hong Kong as an example, the Hong Kong Observatory will consider the temperature, relative humidity, wind speed etc. in issuing the Very Hot Weather Warning.

Hong Kong is located along the South China coast, and belongs to the subtropical climate.  High temperature weather occurs rather frequently in the summer.  From 2007 to 2009, there was a total of 76 days with heat stroke cases.  From the graph below, we can see that when the maximum temperature exceeds 30 deg C, the number of days with heat stroke cases increases sharply. 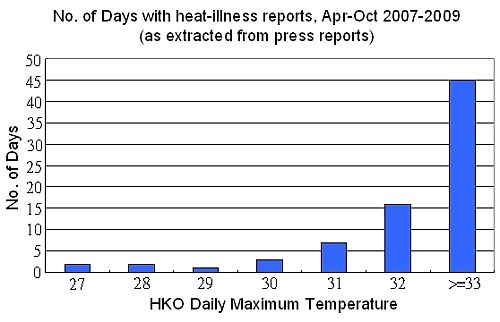 The Pacific Ridge is a perennial stable weather system.  It becomes more prominent during the summer and occasionally extends westwards to cover southeastern China.  As it is dominated by subsiding air, the region under its control is characterized by calm winds, cloud-free and hot weather.  The following example occurred in late July 2007.  From the weather map below we can see the south China coastal areas were dominated by the westward extension of the ridge of high pressure from the Pacific.  From 24 July onwards, there were 12 consecutive days of which the maximum temperature reached 33 deg C or above.

When the center of a tropical cyclone is still at a great distance from Hong Kong, its associated inclement weather may not yet affect our territory, but the subsidence air at its outer circulation often brings very hot weather to the coast of Guangdong.  One example is that on 13 September 2008, when Typhoon Sinlaku was located over the seas east of Taiwan.  Affected by the subsidence air at Sinlaku’s outer circulation, the weather was very hot in Hing Kong and the maximum temperature reached above 34 deg C. 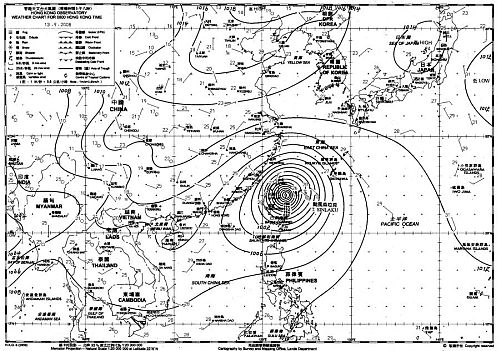