The Hong Kong Observatory (HKO) is responsible for the operation of rainstorm and related warning systems in Hong Kong. HKO also delivers rainfall nowcast products via smart phones and Internet web pages to the public, and provides tailor-made services to clients such as the airport and power companies. These services are made possible by an in-house developed nowcasting system called "SWIRLS". What exactly is "SWIRLS"? The answer is unveiled in this short article.

The full name of "SWIRLS" is "Short-range Warning of Intense Rainstorms in Localized Systems". It is a nowcasting system developed and operated by HKO since 1999. "Nowcasting" refers to forecast of weather in the next few hours, primarily on severe weather such as heavy rain, lightning, hail and thunderstorm-induced gust. Compared to a more general description of local weather  in the "Local Weather Forecast" or "9-day Weather Forecast", SWIRLS focuses on severe weather that is localized and highly-changeable, thus demanding for a high level of accuracy and timeliness.

Through analyzing radar echoes in two successive radar scans, SWIRLS computes the direction and speed of movement of rain areas to obtain information for the distribution of high-resolution radar echo motion distribution. This is similar to estimating the direction and speed of a moving object by observing it on two successively captured photos. After analying the motion of the radar echoes over the whole area (Figure 1), SWIRLS extrapolates the radar echoes according to the speed and direction of movement at each point, thereby projecting the future location of rain areas and hence the rainfall that they will bring to the region in the next few hours. Products in various forms are then generated to support the operation of the weather forecasting Office, other users and the public. The current publicly accessible products include the "Location-based Rain Forecast" in "My Observatory" (Figure 2) and the "Rainfall Nowcast for the Pearl River Delta Region" (Figure 3). 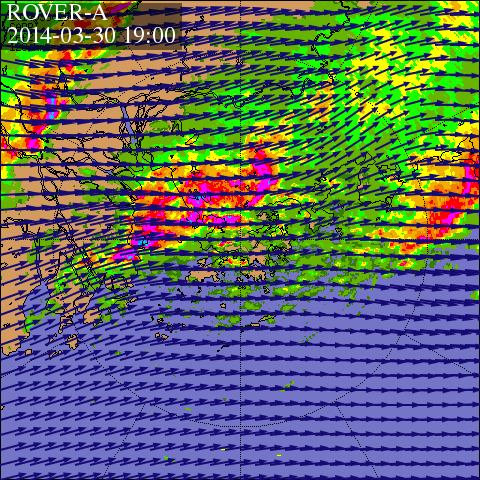 Figure 1   The motion vector field of the radar echoes estimated from radar data at height of 2km valid at 18:56 and 19:00 HKT on 30 March 2014. The arrow indicates the estimated direction and speed of motion at that point.

At present, nowcasting is  primarily based on radar data. Radar is a type of remote sensing equipment that will inevitably  be contaminated by various types of noise. The topography around the radar site may also limit the detection capability of the radar which will affect the performance of nowcasting. Examples include false alarms arising from anomalous propagation of electromagnet waves in autumn (see Artifacts), and failure in detection due to precipitating cloud layer lying below the radar scan. In addition, there is  no reliable way to predict the growth and decay of rain areas for the time being. All these present challenges to nowcasting systems nowadays.

SWIRLS has provided nowcast services in support of major international events, including the 2008 Olympic Games, the 2010 World EXPO and the 2010 Commonwealth Games. HKO also made SWIRLS available for trial use in meteorological services in other countries and regions. "SWIRLS" is one of the leading and renowned nowcasting systems in the world. Through continuous research and developments, we are committed to continue to enhance its performance in the future.

For more technical information on "SWIRLS", please refer to the following articles: