Have you ever played computer simulation games?  In the virtual world, you can act as a train driver to drive a train, a mayor to run a city or even a king to rule an empire.  The experiences are definitely interesting and challenging.  Have you ever thought of going further to become the Mother Nature to control the weather?  If you are interested, you would certainly like to know more about numerical weather prediction (NWP).

Weather condition reveals the state of the atmosphere that is governed by physical laws such as Newton's law of motion, gas law, thermodynamics equation and continuity equation.  To build a numerical weather model, the atmosphere is first divided into a three-dimensional grid with a large set of grid points; then the initial values of meteorological parameters such as pressure, temperature, wind, air density and humidity are computed at the grid points based on observations.  Finally, the future values can be computed according to the above equations and weather predictions can be made. 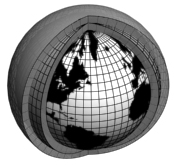 Norwegian meteorologists Vilhelm Bjerknes proposed the above concept in 1904.  Later, British meteorologists Lewis Fry Richardson formulated the detailed procedures and tried to solve the problem numerically.  As general-purpose computers had not yet been invented at that time and the computation was highly complicated, Richardson spent almost six weeks to complete a weather forecast for six hours.  However, he predicted an air pressure change of 145 hPa in six hours, which was exceptionally erroneous.  As a result, when he published his method and findings in 1922, his work was not well recognised.  Meteorologist Jule Charney and mathematician John Von Neumann later simplified the mathematical model and ran it on the first general-purpose computer the Electronic Numerical Integrator And Computer (ENIAC).  The first computer-generated numerical weather forecast was eventually produced in 1950. In the early days of operational NWP, forecasters were skeptical about numerical models.  But nowadays NWP has become an indispensable companion of forecasters, as its skill has significantly improved due to the increase in computing power, better representation of atmospheric process by NWP models and enhancement in both quantity and quality of weather observations.

Sometimes, systematic biases are observed in direct outputs of numerical models.  In addition, model forecasts are the same for locations within the same grid cell.  If the local terrain and land surface characteristics vary considerably among these grid point locations, large errors in surface temperature and winds could result.  To reduce these errors, model outputs are usually post-processed to add more values to the model outputs. 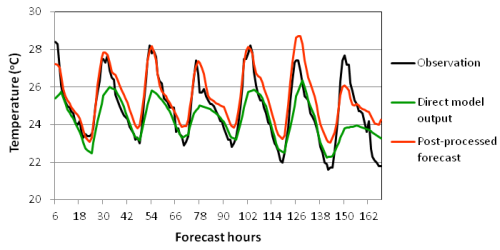 Though NWP has made huge progress since its birth, we do need to understand that there are still limitations.  Some atmospheric processes have to be simplified or even ignored in numerical models in order to reduce the model complexity.  Weather phenomenon with scales smaller than model grid resolutions cannot be resolved by models.  There are errors in observations and their data coverage are insufficient, which affect the accuracy of model forecasts.  And the most critical factor is the chaotic nature of the atmosphere itself, which means that a tiny error in the initial values could result in a large error in the future forecasts.  This really poses a real challenge in extended weather forecast.

Numerical models are not only used in daily weather forecasts, it can also serve as an atmospheric laboratory.  Experiments which are difficult to be performed in real-life, such as study on the impact of rise in sea surface temperature on tropical cyclones intensification, could be easily done in numerical models.  Data output from NWP models are also utilised in driving other specialised forecast models to predict sea waves, storm-surge, etc.  Furthermore, NWP equations are used in climate models for simulating climate change and global warming.  If you are interested in numerical weather models, maybe you can try to think of other applications?