The cumulus weather described by a Chinese poet as "the summer showers that develop over every other paddy field can only wet one of a crow's wings" is, in scientific terms, as follows. In day time, especially in mid-summer, the ground heats up under the sun and spurs convection in the air. This lifts moisture up the atmosphere aloft, which gradually develops into isolated, floating cumulus. Such clouds, with a flat base, a protruding top and the look of marshmallow, are commonly known in Chinese as "Cloud Dumplings". 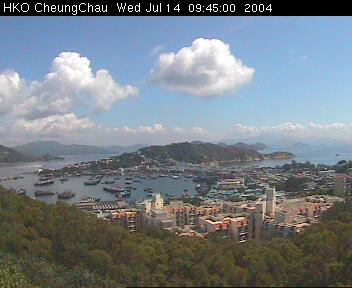 The weather picture taken in the morning of 14 July 2004 at the Cheung Chau Automatic Weather Station shows cumulus in the sky.

Cumulus clouds may not bring rain in their early stage, but if they are to develop further, rain will fall sooner or later. The kind of rain brought by the cumulus is called showers. Showers are distinguished by their limited rain area under the cloud, and their short duration. When encountering showers, you may as well find shelter and wait till the cumulus passes away, instead of getting yourself soaked. The literati dramatize the isolated nature of showers, describing it as "the summer showers that develop over every other paddy field can only wet one of a crow's wings."

If the cumulus continues to grow, its top will become very bright in the late stage, looking like a cabbage and reaching a height beyond 10,000 m. By then it is called cumulonimbus. The rain at this stage will be torrential, possibly with thunderstorms. 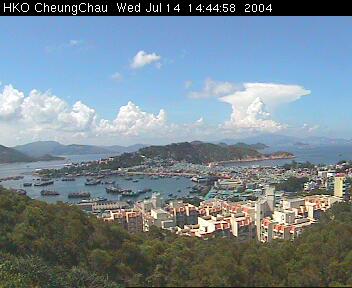 The weather picture taken on the same day at the Cheung Chau Automatic Weather Station depicted a cumulonimbus on the right hand side which had evolved from the cumulus cloud earlier on.

There is also a poetic description about the weather associated with stratiform clouds: "With dark clouds overshadowing the sun, there will be rain after rain at night." Stratiform clouds are layered clouds formed mainly by uplifting of air on a large scale, commonly seen near a front, which signifies the interface of warm, moist air climbing up cold air on encountering the latter. As the warm, moist air goes up, the moisture therein will condense into extensive stratiform clouds. The rain from thick stratiform clouds usually lasts longer than showers although the intensity is lighter.

Winter in Hong Kong is often affected by cold air coming down from the north. When the cold air approaches Hong Kong, thick, extensive clouds obscuring the sky will rise from the horizon, moving over gradually. As the cold air arrives, there may be extensive rain lasting for a fairly long time. The phenomenon coincides with the folklore that says, "With dark clouds overshadowing the sun, there will be rain after rain at night." 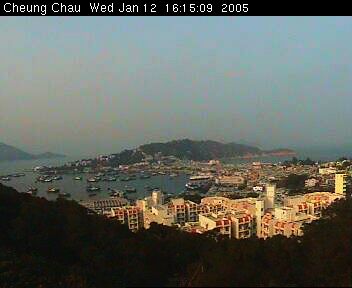 The weather picture above was taken at dusk on 12th January 2005, at the Cheung Chau Automatic Weather Station. It was sunny most of the time that day, but by dusk stratiform clouds could be faintly seen approaching from the west (left hand side). 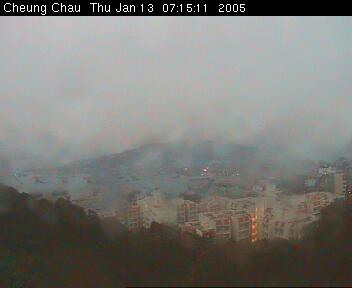 A cold front reached the south China coast early in the morning on the following day (13th January 2005), bringing clouds and rain to Hong Kong.

The kind of cloud brings the kind of rain. When you see these special clouds next time, watch how they evolve in shape and their areal coverage. You may as well do a weather prediction on the spot.