The higher you climb, the colder it gets explained

The higher you climb, the colder it gets explained 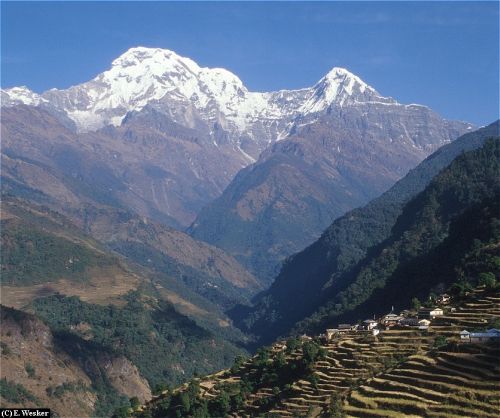 A mountain covered with snow all the year round gives people a feeling of 'The higher you climb, the colder it gets'. Why is it colder at high ground? Let us first look at how the air gets heated up.

The energy needed to heat up the Earth's atmosphere comes mainly from the Sun. It includes direct sunlight and the heat re-emitted from the ground after the latter has absorbed solar energy. In respect of direct sunlight, the air at high altitudes, being closer to the Sun, is supposed to receive more solar energy. However, it actually absorbs solar energy poorly. The reason why the air temperature rises is due mainly to the heat re-emitted from the ground through various physical processes (including radiation, convection and turbulence).

So, the higher you go up, the colder it gets. But how cold would it get? Roughly, the temperature drops by about 6 degree Celsius for every 1000-metre rise in altitude. As an example, at Mount Everest, the highest mountain in the world, where the altitude is about 8 800 metres, the temperature drop will be about 50 degrees Celsius. Even with a summertime temperature of 19 to 28 degrees near the sea level, it will get down to 20-30 degrees below zero at the mountain top. It is even worse in winter, when the mercury could fall to minus 50!