The Hong Kong Observatory (HKO) has been utilising big data to relate weather to its impact. This enables the weather forecasters to assess the society impact of inclement weather. One case in question is the approach of super typhoon Mangkhut in September 2018. Impact information such as fallen trees or flooding from incident reports disseminated by the government was automatically decoded and overlaid with weather information on a map. This provides a more comprehensive picture for impact analysis of weather by forecasters.

Tropical cyclone Mangkhut formed over the western North Pacific on 7 September 2018 and intensified into a super typhoon four days later. It moved across the northern part of Luzon and entered the South China Sea on 15 September. Mangkhut edged closer to the coast of Guangdong rapidly on 16 September. Mangkhut came very close to Hong Kong, with its centre just about 100 km from the HKO. As Mangkhut made landfall near Taishan, Guangdong, local winds gradually veered from northeasterlies to southeasterlies.

The hilly terrain of Hong Kong acted as an effective shelter. When north to northeasterly winds prevailed in Hong Kong on the morning of 16 September, winds in the urban areas on the lee side of the hills were relatively weak (the red ellipse in Figure 1). Having said that, high winds at gale force or above were affecting high ground and offshore areas. Reports of fallen trees were received. When local winds veered gradually to the east and strengthened further in the afternoon, most of the previously sheltered places became fully exposed to the ferocious winds. The cumulative number of fallen tree reports increased sharply in only 4 hours (Figure 2). Figure 3 shows the time series of the number of reports of fallen trees at hourly intervals. 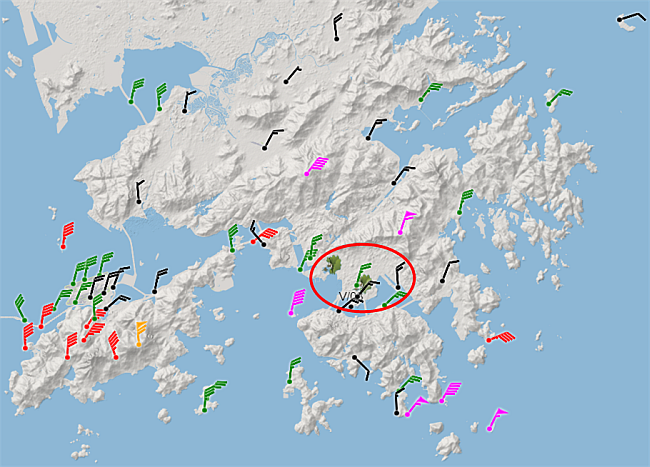 ）ending at 08 HKT, 16 September 2018. Red, purple or orange wind barbs signifying gale force winds or above. The urban areas on the leeward side of the hills to the north marked in the red ellipse.

Figure 2： Plotting conventions same as in Figure 1, except with observation time at 12 HKT. 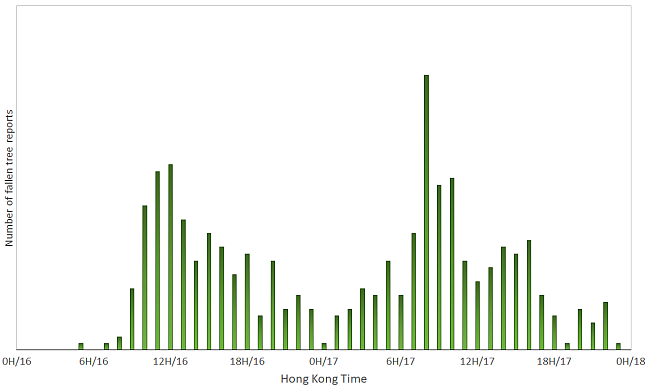 Comparison of Figure 1 and Figure 2 indicates clearly that the hilly terrain of Hong Kong is an effective shelter under north to northeasterly wind regimes, and the sharp increase in the number of the fallen trees was due to the strengthening of winds while veering to the east. It is important to note that the highest and the broader peak in the number of the fallen trees (around 08 HKT on 17 September) actually occurred later when winds weakened. Hence the public should stay on the alert of the danger of high wind impact even when a typhoon has departed.