An interesting straight "rainbow" feature vaguely appeared in the sky over Hong Kong near noon time on 19 July and 10 August 2017 (Figures 1(a) and (b)). In fact, it was not a rainbow, but an optical phenomenon called "Circumhorizontal Arc".

When sunlight or moonlight is refracted or reflected by ice crystals suspended in the atmosphere, a type of optical phenomena generally known as "halo" will be produced. The most commonly observed type of halo phenomenon is the halo surrounding the Sun with an optical radius of 22 degrees (also named as the "22o halo" or "small halo"1). Although "Circumhorizontal Arc" resembles a rainbow, it indeed belongs to a type of halo phenomenon. It occurs less frequent than the "22o halo".

How does "Circumhorizontal Arc" form? First of all, there exists a layer of cirrus clouds in the upper atmosphere. When hexagonal plate-shaped ice crystals inside the cirrus clouds suspend horizontally in the sky, sunlight entering from the vertical side face of the crystals will be refracted and then emerges from its horizontal bottom face, with different degrees of refraction splitting up white light into different colours (Figure 2a). The most critical factor is that the incident angle of sunlight on the side face of the ice crystals must be greater than 58o (Figure 2b). As such, it may only occur near the noon time. When the angular elevation of the sunlight is about 68o, it reaches its maximum intensity. "Circumhorizontal Arc" is different from and the "22o halo". It is located beneath the Sun and closer to the horizon, extending parallel to the horizon, with red colour on top and violet at the bottom (same colour sequence as that of a "primary rainbow".

Whether one can see "Circumhorizontal Arc" also depends on the observer's geographic position. If the observer is located at high latitude of 55o or more (for example, some countries in northern Europe), this phenomenon can never be seen because the elevation angle of the Sun is always lower than 58o. Besides, some people may also easily confuse "Circumhorizontal Arc" with "Iridescent Clouds". Although the two look similar, their causes of formation are different. For details, please refer to the Observatory's cloud ebook "Cloud Appreciation by Dr Tin" under "Iridescent"

Wonders in the sky manifest themselves in so many varieties. There is another equally stunning optical phenomenon called "Circumzenithal Arc" (Figure 3). "Circumzenithal Arc" similarly originates from refraction of sunlight by hexagonal plate-shaped ice crystals suspending horizontally inside cirrus clouds (Figure 4a). However, the difference from "Circumhorizontal Arc" is that "Circumzenithal Arc" is located above the Sun, with an arc-shaped surrounding the zenith. It has violet colour on the top (inside) and red at the bottom (outside) of the arc. The colour sequence is opposite to that of the "Circumhorizontal Arc", and it looks like an upside-down rainbow. Besides, "Circumzenithal Arc" occurs only when sunlight enters from the top face of ice crystals and emerges from the side face with angle of incidence less than 32o (Figure 4b). Due to lower incident angle of sunlight, "Circumzenithal Arc" may sometimes occur simultaneously with sundog. If the incident angle of sunlight is greater than 32o, then only the single-coloured (white) "Parhelic Circle "2 can be produced.

As the occurrence of "Circumhorizontal Arc" and "Circumzenithal Arc" depends on a combination of various conditions, they occur less frequently than the "22o halo". 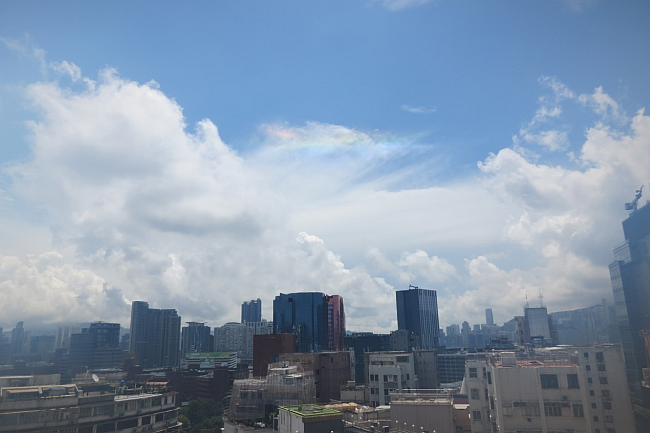 Figure 1     (a) The optical phenomenon "Circumhorizontal Arc" appeared in the sky over Hong Kong near noon time on 19 July 2017.(Photo taken by the weather observer at the Observatory) 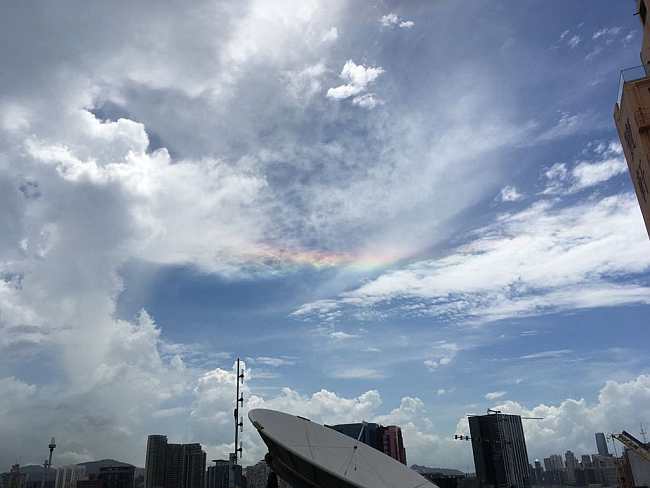 Figure 1     (b) The optical phenomenon "Circumhorizontal Arc" appeared in the sky over Hong Kong near noon time on 10 August 2017.(Photo taken by the weather observer at the Observatory). 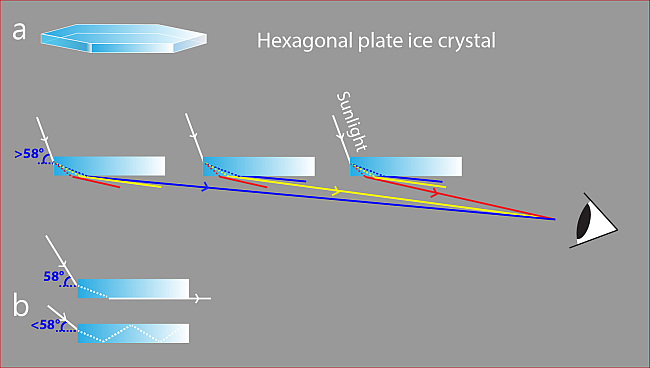 Figure 2     (a) Sunlight entering the side face of the hexagonal plate-shaped ice crystals, and emerging from the bottom face after twice refraction. As different colours of light have different wavelengths and travel at different speeds inside the crystal, they are refracted at different angles; (b) If the angle of incident sunlight is less than 58o, the light ray will undergo internal reflections inside the crystal and thereby cannot produce the "Circumhorizontal Arc". 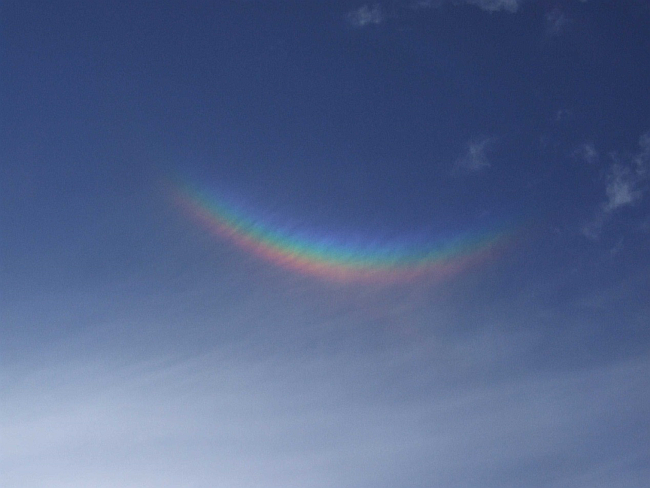 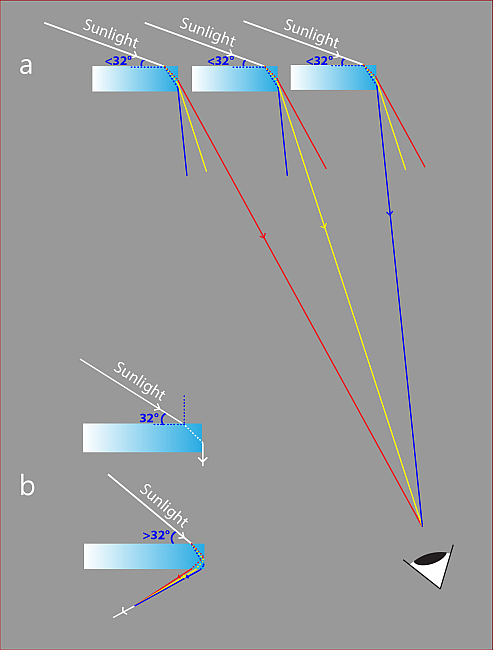 Figure 4     (a) Sunlight entering the top face of the hexagonal plate-shaped ice crystals and emerging from the side face, being splitting up into different colours after refraction; (b) If the incident angle of sunlight is greater than 32o, the light ray will first undergo internal reflection inside the crystal and then refracted at the bottom face in the opposite direction. Different colours of light will then converge and produce the single-coloured (white) "Parhelic Circle".