If you have the chance of examining the satellite images carefully, you might occasionally notice some well organized strip-like cloud bands over the Yellow Sea and the sea areas to the south of the Korean Peninsula. In particular, chains of cloud vortices might appear to the south of Cheju Island (Fig.1). The cloud patterns are normally observed in cold seasons, typically a couple of days after the southward intrusion of cold air mass from northern China. So what are the factors contributing to the formation of such cloud patterns?

The strip-like cloud bands are known as "cloud streets". They are generated when strong northerly winds prevail over the above-mentioned sea areas in cold seasons. When the cold and dry air mass originating from inland areas blows across the warm and moist sea surface, air near the surface will become warmer and more humid, and vertical convection will be triggered. The formation of clouds follow, enhanced through the turbulence induced by the high winds and aligned as cloud streets along a north-south orientation.

Apart from the cloud streets, we can also observe the formation of "vortex streets" over the sea areas downwind of Cheju Island. The formation mechanism is closely related to the topography of Cheju Island, an oval-shaped volcanic island. From east to west, the distance across the island is about 175 km. The Halla Mountain, rising to 1,950 m above sea level, is located at the central part of the island. When cold air flows across Cheju Island from north to south, the airstreams will tend to flow around the island on both sides, generating alternating vortices rotating in both clockwise and counterclockwise directions on the lee side of the island. The vortex is known as "von Karman vortex" in fluid dynamics. Clouds formed in the airstream will be dragged downwind by the flow, creating the vortex streets. Similar vortices can also be observed on the water surface downstream of a rock blocking the flow in a brook.

From the synoptic weather pattern, the southward advance of cold air in eastern Asia is usually associated with the development of a high pressure area over northern China. As the high pressure area migrates eastwards across northern China (Fig. 2, 3 and 4), the pressure contours over the Yellow Sea will become meridionally aligned. This will generate a wind blowing roughly parallel to the pressure contours with higher pressure to the right (to the left in southern hemisphere). The more tightly packed the contours (larger pressure gradient), the higher the wind speed will be. Hence, the eastward movement of the high pressure area across northern China will often trigger cold and strong northerly winds over the Yellow Sea and the Korean Peninsula, leading to the formation of cloud streets and vortex streets in the region. 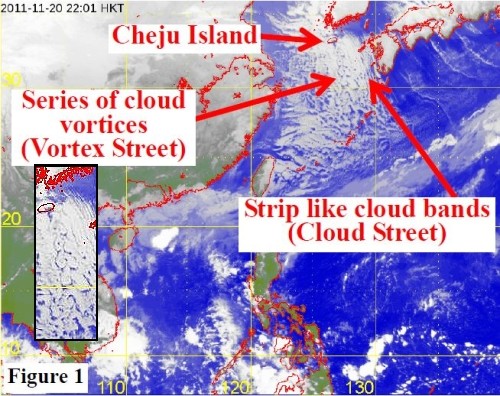 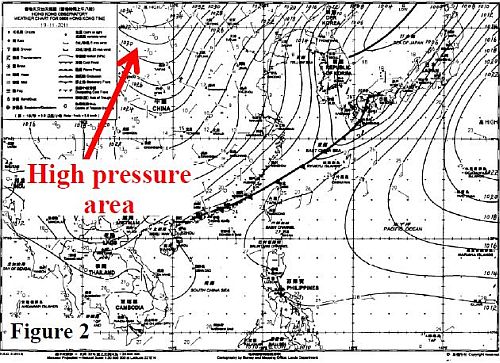 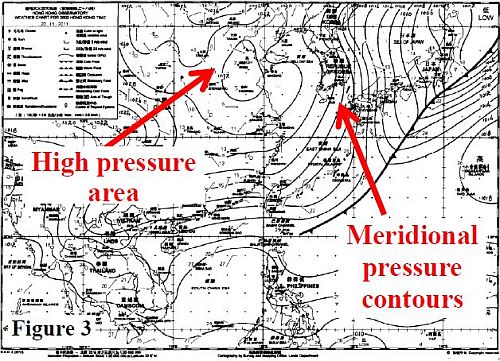 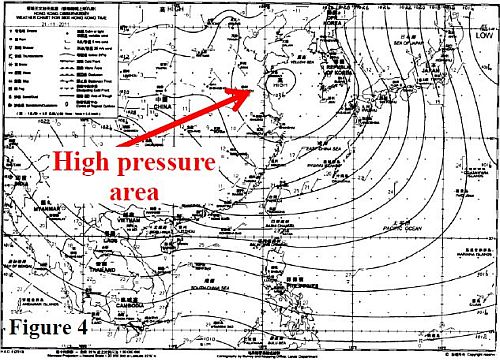 A cold front crossed the south China coast on 19 November (Fig.2). The high pressure area over northern China then migrated eastwards in the following couple of days (Fig.3, Fig.4), giving rise to strong and cold northerly winds over the Yellow Sea and the Korean Peninsula, and leading to the formation of cloud streets and vortex streets in the region.