Very Hot Weather Ahead of an Approaching Tropical Cyclone

Very Hot Weather Ahead of an Approaching Tropical Cyclone

Do you notice that sunny and very hot weather usually precedes the approach of tropical cyclones in Hong Kong?  More often than not, the severe thunderstorms that follow will bring down temperatures towards the evening.

The weather on 27 and 28 July 2008 is a good example. The temperature at the Hong Kong Observatory on 28 July rose to 34.6 degrees, the highest of the month.  The severe thunderstorms that developed over inland Guangdong moved south to affect the territory in the afternoon of 27 July as well as the evening of 28 July. Hails were reported on 27 July during the passage of thunderstorms. 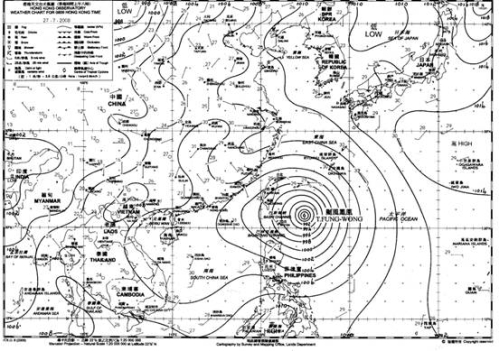 At the time, Typhoon Fung-Wong over the western Pacific was moving towards Taiwan (Figure 1).  There was severe convection inside the circulation of the typhoon, resulting in intense rising air and hence formation of rain bands.  However, when the rising air reached the top of the troposphere, they could no longer rise but spread sideways and subside in the typhoons neighbouring areas.  The subsiding air brought fine and light wind conditions to areas beneath.  On that day (27 July), the subsiding air ahead of Fung-Wong brought fine weather to southern China (including Hong Kong, Figure 2), and abundant sunshine caused temperatures over inland areas to rise sharply.

As typhoons in the Northern Hemisphere are swirling in an anti-clockwise sense, Fung-Wong near Taiwan brought light northerly winds to Hong Kong.  These winds carried the very hot air over inland areas to the territory.  Added to this was the subsiding air, which brought temperatures further up (Note: contrast this with rising air, which tends to cool with height).  Together with intense sunshine and light wind conditions, the local weather was very hot and uncomfortable.

The very hot air near the surface also set off convection.  However, the ascending air was capped by the subsiding air from Fung-Wong and did not go very far up.  As the day proceeded surface temperatures continued to rise, and the convection became severe enough to overcome the subsiding air and reached a greater height, setting off thunderstorms (Figure 3) and even hails over the inland areas.  They followed the northerly winds to affect downwind Hong Kong (Figures 4 and 5).  Hails were reported at Sha Tau Kok, Fanling and Yuen Long during the passage of the thunderstorms that day.  The thunderstorms also brought with them cooler air from above to the ground surface and lowered the temperature. 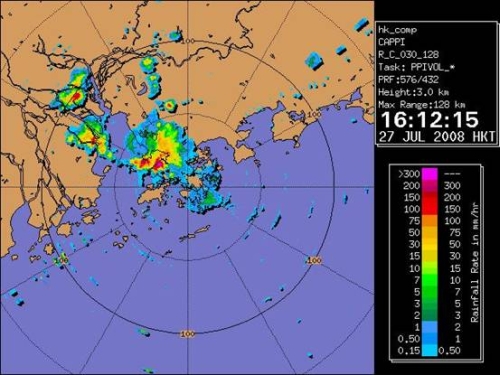 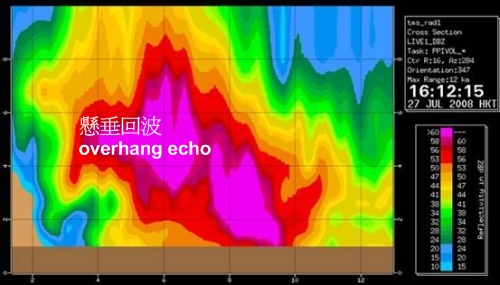 Typhoon Sinlaku which affected Taiwan around Mid-Autumn Festival (Figure 6) is yet another example of tropical cyclone bringing hot and uncomfortable weather to Hong Kong. The temperature at the Observatory reached a high of 34.2 degrees on 13 September.  The high of 33.8 degrees on 15 September is the highest recorded on the ensuing day of Mid-Autumn Festival since records began.  The thunderstorms brought about by Sinlaku were not as severe nor widespread as Fung-Wong.  However, the subsiding air of Sinlaku and the light wind condition rendered the dispersion of suspended particulates in the air rather difficult.  As a result, haze lingered over Hong Kong during the period and the visibility at Chek Lap Kok once dropped to 3600 metres on 15 September. 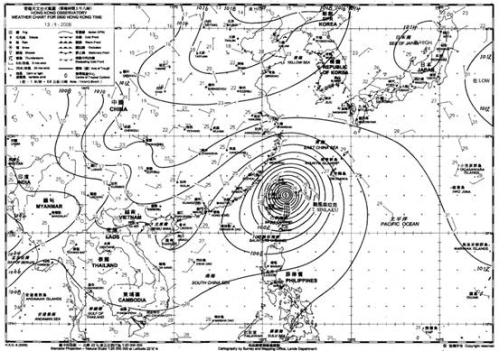