There are around 30 tropical cyclones in the western North Pacific annually, normally around 6 of which will affect Hong Kong and necessitate the issuance of tropical cyclone warning signal. Tropical cyclones very often bring severe impact such as high wind, rainstorm and storm surge. As such, accurate forecast of tropical cyclone track is one of the major challenges to meteorological services. With ever-increasing computational power and continued advancement in the numerical weather prediction models, many people nowadays may just make use of direct model outputs to predict tropical cyclone track and discuss whether a tropical cyclone will directly hit Hong Kong. However, owing to the chaotic nature of weather systems, a small change in the initial condition may result in a substantial difference in the weather forecast for the next few days. Even though major meteorological services use high performance computers to simulate the weather evolution, their forecast tracks may differ from each other significantly because of the use of different weather observation data and computer weather models.

Weather forecasters will analyse all the observation data, current synoptic pattern, forecast outputs from different computer weather models and formulate a forecast track of tropical cyclone based on an integrated approach and their experience. At present, the Observatory provides 5-Day Tropical Cyclone Track and Intensity forecast on its Tropical Cyclone Track Information webpage. This type of forecast with explicit information on the forecast track and intensity is known as deterministic forecast. However, it is inevitable that the errors of forecast track and intensity generally increase with increasing in forecast time. If we rely solely on the deterministic forecast, other potential alternative scenarios would be ignored.

Probabilistic forecast could fill the gap of such deficiency in the deterministic forecast. The Observatory launched The Tropical Cyclone Track Probability Forecast in August 2017. It is a post-processing product utilising ensemble forecast data from computer weather models. In ensemble forecast, the computer weather model is run simultaneously for many times to simulate the tropical cyclone tracks for the next nine days under various weather scenarios. The probability of tropical cyclone passing within 120 kilometres of each location on a map will be calculated. For instance, Figure 1 depicts an example of forecast tracks of tropical cyclone Mangkhut in September 2018 from different ensemble members of computer weather models on 11 September. From the possible scenarios shown in the figure, Mangkhut was forecast to move towards the vicinity of Luzon Strait and then quickly edged close to the coastal areas of southern China, posing a serious threat to Hong Kong and Guangdong region. Ensemble members in Figure 1 indicated the potential landfall positions of Mangkhut covering the whole south China coast and even the northern part of Vietnam, showing that there was a certain extent of uncertainty in the overall forecast trend. From the probability forecast map in Figure 2, Mangkhut had a higher probability of making landfall near the Pearl River Estuary. During the daytime on 16 September, Mangkhut skirted within about 100 kilometres to the south-southwest of the Hong Kong Observatory and made landfall near Taishan, Guangdong, which was consistent with the track probability forecast given a few days ago as described above.

In addition to showing the trend of movement and possible scenarios of a tropical cyclone, how can we make better use of the information on the track probability forecast? Taking Severe Typhoon Soulik in 2018 as an example, the probability forecast map on 19 August 2018 in Figure 3 shows a 50% chance of posing a threat to the vicinity of Korea. Therefore, travellers who planned to visit or had already been there could adjust their itinerary or leave earlier depending on their own situation and needs. Meanwhile, the chance for Soulik to affect eastern China like Shanghai or Kyushu of Japan was relatively low. However, if their plan to visit these places was vulnerable to weather, the corresponding backup or contingency arrangement should be prepared for the sake of safety.

Besides Tropical Cyclone Track Probability Forecast, the Observatory also launched the Extended Outlook to provide the 14-day probability forecast of daily minimum and maximum temperatures. The Observatory is developing other probabilistic forecasts with a view to supporting the public, the government and the public utilities to better prepare for the weather changes and manage their risks as early as possible in order to mitigate and reduce the impact of natural disasters. 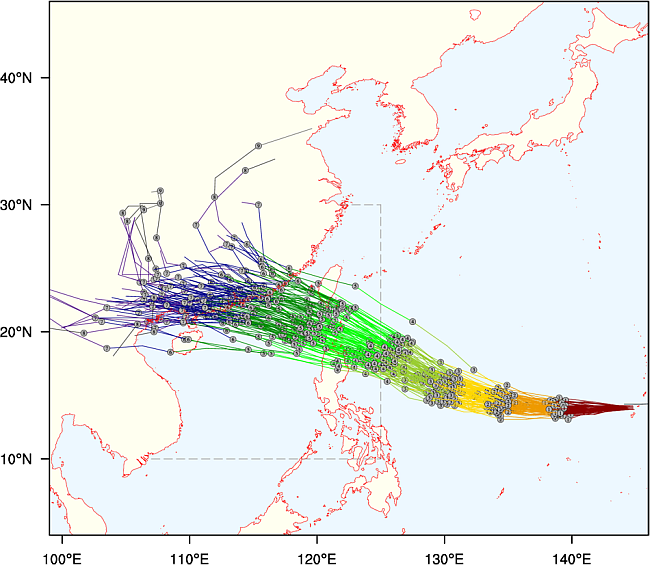 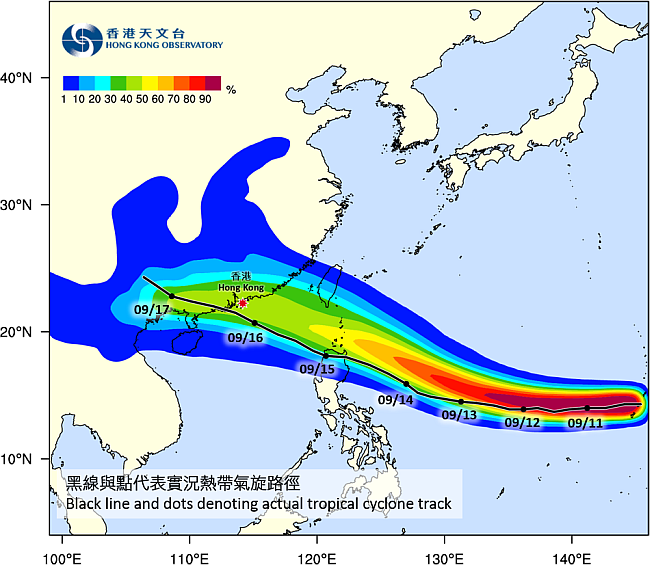 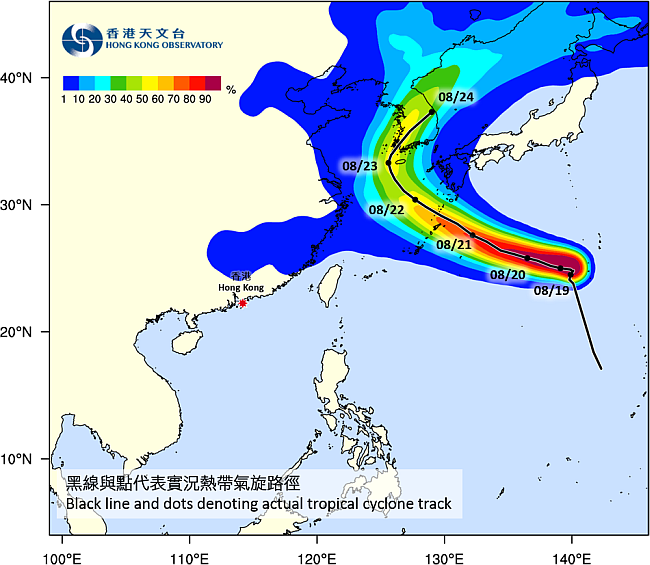