The intensity of a tropical cyclone is determined by the strength of the surface winds near the centre. However, unless there are land stations in the vicinity, or in the rare case of a ship reporting near by, this kind of information is not readily available. The termination of aircraft reconnaissance over the western North Pacific in August 1987 has cut off another important source of information. With the scarcity of direct data, the intensity of a tropical cyclone has to be inferred from analysis of cloud top temperatures as shown on enhanced infra-red satellite pictures.

Over the vast expanse of the oceans, satellite analysis plays an important role in locating the centres of tropical cyclones. Satellite pictures are now received at hourly intervals and form a near real-time observational basis for tracking tropical cyclones.

The appearance of a well-formed eye is a definite indicator of where the storm is. If an eye is absent, it is still possible to obtain a reasonable estimate of the centre location by tracing the spiral rainbands of the storm or by studying the relative motion of cloud features near its centre.

Typhoon York (1999) as seen from the satellite (above) and the radar (below) at about the same time.

Despite advances in satellite and radar technology, conventional weather chart analysis remains the basic tool of forecasters. During the approach of a tropical cyclone, surface charts are analyzed on an hourly basis while charts of higher levels in the atmosphere are drawn on a 6-hourly basis.

The usefulness of chart analysis is not confined to providing information on the position, directional tendency, and intensity of the approaching tropical cyclone. It also impresses upon forecasters the changing background weather pattern to which the storm is intimately related. If the trends of such changes are correctly diagnosed and anticipated, forecasters will be in a better position to assess the future movement and intensity variation of the tropical cyclone.

Left on its own, a tropical cyclone in the Northern Hemisphere has an inertial tendency to drift towards the northwest. Nevertheless, its motion is more often dominated by external forces. The basic concept here is that the environmental current steers the tropical cyclone. An analogy is the movement of a water eddy circulating but moving bodily within the main flow of a stream or river. Over the western North Pacific, most of the tropical cyclones form along the southern or southwestern flank of the subtropical ridge of high pressure where the steering current flows to the northwest. This coincides with the inertial movement tendency and explains the predominant northwestward storm tracks observed.

If the ridge is persistently strong and the environmental pattern is slow-changing, then the movement of tropical cyclones will be more straightforward. This is, of course, more often than not, too good to be true. Changes and fluctuations frequently occur during the lifetime of a tropical cyclone and other factors may also become important. As a result, the actual storm track may be highly irregular and eccentric, as in the extreme example of Typhoon Wayne (1986). Examples of factors that need to be considered in track forecasting are given below:

While tropical cyclone track forecasting based on interpretation of past and current weather situations requires a lot of skill and experience on the part of the forecasters, guidance is also available from a host of objective methods.

Climatology and statistics are the mainstream objective methods used for forecasting the track of a tropical cyclone. In essence, what is being pursued is to try to learn from the past so as to infer the future. The rationale is that a storm in circumstances (in terms of time of the year, location, and prevailing atmospheric environment) similar to that of previous storms is likely to behave similarly. The end products are normally some kind of average, probability, extrapolation, nomograms, or correlation formulae. Apart from the behaviour of the storm itself, these methods can also provide helpful indications as to the probable local wind and weather conditions.

Another major stream consists of various statistical-dynamical methods. Here, the dynamical forces that are responsible for steering the storm are also taken into consideration in projecting future storm movement.

A more involved exercise, but one which is gaining popularity all the time, is to simulate the real atmosphere by means of a numerical model. After carefully screening the initial data and meticulously incorporating them into the model, the "mathematical atmosphere" is allowed to run its course according to the imposed physical laws and specified empirical constraints. To deal with the enormous amount of computation, high-speed computers are required to make the exercise operationally viable. Such computers are only available in major meteorological centres around the world. The Hong Kong Observatory receives the numerical products of some of these centres as well as running its own limited-area model. The various models perform very well in the realm of global scale features and systems of higher latitudes. However, the forecasting of tropical and smaller scale systems such as tropical cyclones has only met with limited success and generally falls short of the desired degree of consistency. This remains an area of active research. The continued application of resources to refine these methods is expected to produce improved models and skills as time goes on. 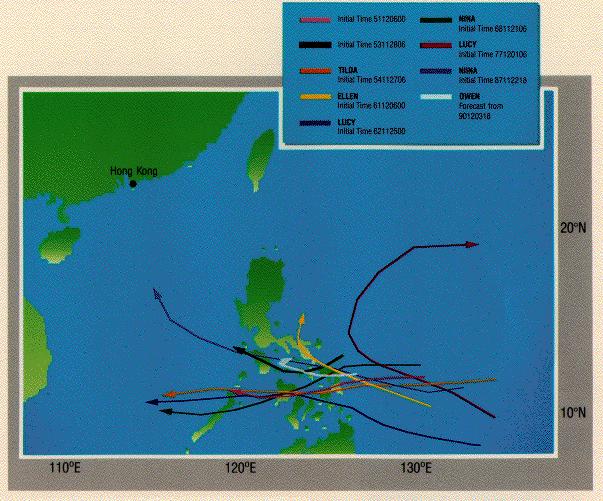 Sample of products from the Analog Method which attempts to extract from past record tropical cyclones in circumstances similar to that of the current storm.

The science of tropical cyclone forecasting is by no means perfect. The multitude of contributing factors are so complex that they are as yet not entirely understood, or are only crudely represented (sometimes for practical reasons) in the various forecast schemes. The volatile nature of tropical cyclones, with their inherent fluctuation in both motion and intensity, is also partly to blame.

Further uncertainty arises from the problem of identifying the initial position of the tropical cyclone, which many experts regard as a major source of error in forecasting. The question of where the storm is now is not purely for the sake of filling in the numbers in the warning bulletins. It is also critical in predicting where the storm will be. The logic here is quite understandable. If the input data (in this case the present storm position) is imperfectly known, then one should not expect the forecast methods to give perfect output (in this case, future storm position). In fixing the initial position, not every tropical cyclone has the eye-catching feature of an eye for forecasters to pinpoint. Some do not even have spiral bandings to give clues to the possible circulation centre. In poorly organized storms, there can be strong asymmetry and irregularity in the horizontal structure as well as distortion in the vertical alignment.

Infra-red (left) and visible (right) satellite pictures of Tropical Storm Hope (1989) taken at the same time. The tell-tale spiral features which define the circulation centre are much better depicted in the visible version. Visible imagery, not available at night in the absence of sunlight, will be sorely missed by night forecasters in situations like this.

Another problem related to Hong Kong concerns its geographical setting. Most tropical cyclones approach the coast of southern China on a west-northwestward track. With the orientation of the coastline at such an oblique angle to the storm track and Hong Kong being such a small target, a deviation of only 10 degrees in the direction of storm movement is enough to divert the storm to Hainan Island instead of a direct hit on Hong Kong. 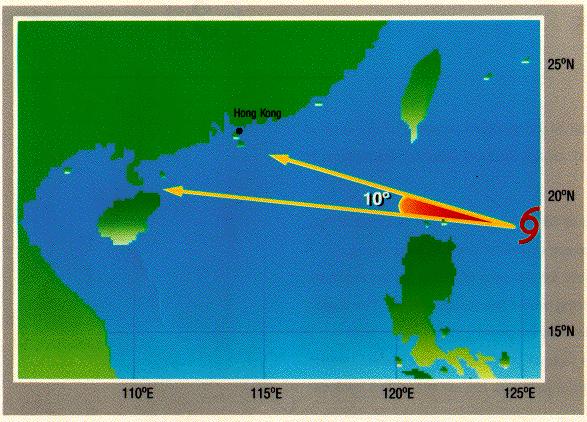 A mere difference of 10 degrees in the direction of movement can result in contrasting weather scenarios in Hong Kong.

Faced with an uncertain and ever-changing situation, forecasters need to keep a close watch and be prepared to make timely updates and intelligent decisions. By the same token, the public should be aware of the uncertainties involved and be prepared to respond to the latest development as indicated by the warning bulletins.