Formulation of the annual tropical cyclone forecast had been based on a conceptual model using the forecast El Nino/La Nina status of the year as predictor.  After years of implementation and experience, it is found that the skill of this conceptual model approach is more or less on a par with that of the climatology.  In recent years, the Observatory explored the use of dynamical climate model outputs provided by major climate prediction centres to improve the annual tropical cyclone forecast.  These dynamical climate model outputs can be utilized to predict not only regional seasonal temperature and rainfall but also tropical cyclone activity as well.

The Observatory is currently investigating a statistical-dynamical approach to forecast the yearly N500 of Hong Kong.  In many studies, the Poisson distribution is employed to model the distribution of tropical cyclone occurrence in a certain period of time (e.g. summer) in a certain region (e.g. the South China Sea).  The Poisson distribution is solely determined by the average number of occurrence, which is normally unknown and estimated from historical data.  Hence, a simple method of forecasting tropical cyclone occurrence is based on the mean of historical data.  However, such an invariable forecast is bound to be unable to capture the year-to-year variation of the observation.  A better forecast can be achieved by assuming that the average number of occurrence depends on some environmental factors (e.g. winds and sea surface temperature) which vary in time.  This is a rather reasonable assumption as tropical cyclone occurrence depends on where the tropical cyclone genesis takes place and whether the atmospheric circulation is favourable to bring the tropical cyclone to the region of interest.  These environmental factors can be extracted from global dynamical climate model outputs.  Once a statistical relationship is established between the past observations and the corresponding environmental factors, it can be used to forecast new observations.

As one of the Global Producing Centres for Long Range Forecasts designated by the World Meteorological Organization (WMO), the Climate Prediction Center (CPC), NOAA, USA, provides operational global long range forecast data as well as re-forecast data generated by dynamical climate model on its website.  HKO attempted to use the model data provided by CPC to forecast yearly N500 of Hong Kong.  The period of our investigation is 1982-2009.  In order to have a fair assessment of the forecast skill of the statistical-dynamical approach, cross-validation was performed.  In the cross-validation, a single observation was hidden or deleted from the dataset in turn.  Predictor selection, forecast model building and prediction for the hidden/deleted observation would be conducted based on the "1-out" dataset.  The predictions would then be verified against the hidden/deleted observations to assess the skill of the method.

Fig. 2 shows the time series of actual observations of yearly N500 of Hong Kong and the forecasts given by the new statistical-dynamical approach.  The climatological forecast was used as a reference forecast which produced a root mean squared error (rmse) of 1.87.  The statistical-dynamical approach is able to reduce the forecast error by 30% to 1.28.  The cross-validation result shows that the potential of real life application of the forecast method is high.  Outputs of different climate models will be tried out and further study on the extraction of environment factors will be conducted with a view to improving the forecast skill. 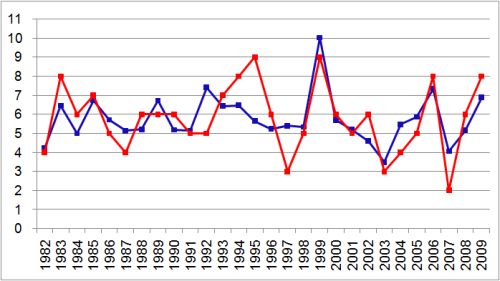 Fig. 2    Observations of yearly number of tropical cyclones coming within 500 km of Hong Kong (red) and forecasts given by the statistical-dynamical approach (blue).