The terms 'typhoon' and 'hurricane' are often mentioned in the news or weather bulletins. What are the differences?

Cyclones that form over the ocean in the tropical regions are generically called 'tropical cyclones', although they are also known by different names in different ocean basins (Table 1), such as 'typhoon' in the western North Pacific, 'hurricane' in the North Atlantic and 'cyclonic storm' in the North Indian Ocean.

The origin of the Chinese term 'typhoon' remains a subject of much speculation, and a brief description is provided at the end of this article. Interestingly, the English term 'typhoon' sounds like the Chinese pronunciation of 'Da Feng', which literally means 'great winds' or 'a wind strike'. According to the definition in the Oxford English Dictionaries, the word 'typhoon', originating in the late 16th century and brought in by the Portuguese, probably stemmed from the Arabic 'ṭūfān' or the Greek 'tuphōn' for 'whirlwind', and might also come from the Chinese dialect 'tai fung' for 'big wind' (Ref. 1).

Over the North Atlantic, central and eastern North Pacific, tropical cyclones are known as 'hurricanes' (Table 1), linked to the native central American word 'huracan' which means 'god of evil'. Hurricanes are classified further into Category 1 to 5 according to the Saffir-Simpson Hurricane Wind Scale (SSHS). According to SSHS, the maximum 1-minute mean wind speed ranges from 119 – 153 km/h for a Category 1 hurricane, whereas a Category 5 hurricane has a maximum 1-minute wind speed of at least 252 km/h. Examples of well-known hurricanes are Hurricane Sandy of 2012 and Hurricane Katrina of 2005, with peak intensities at Category 3 and Category 5 respectively.

In another context, the term 'hurricane' refers to 'hurricane-force wind', wind at a certain location has a speed equal to or greater than 118 km/h or Force 12 in the Beaufort wind scale (Table 2 and Ref. 2; note that operationally, the Hong Kong Observatory adopts the 10-minute mean wind speeds as the reference). In Hong Kong, such sustained wind speeds are rare over land and are usually experienced during the close passage of a mature typhoon. The Observatory will consider issuing the Hurricane Signal No. 10 whenever winds of such strength are expected near the sea level (Figure 1). Gusts may be much higher than the mean wind speed and can exceed 220 km/h. For example, a maximum 60-minute mean wind speed of 133 km/h and maximum gust of 259 km/h were recorded at the Observatory's Headquarters during the passage of Typhoon Wanda in 1962. Squall lines or intense thunderstorms may also bring very high gusts, but the occurrence of sustained hurricane-force winds are rare in these relatively short-lived weather systems.

Table 2   'Hurricane' wind as defined in the Beaufort wind scale 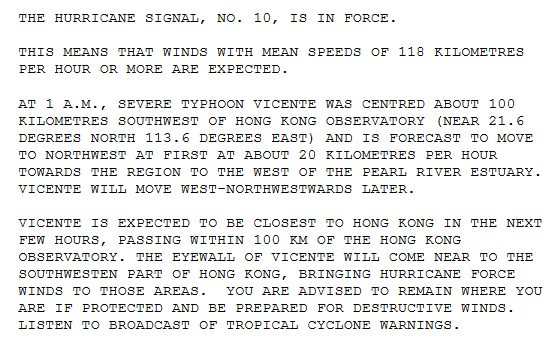 In other parts of the world, hurricane-force winds often occur on high mountains, and may occur from time to time during the passage of extratropical cyclones or depressions. On 8 December 2011, a deep Atlantic low pressure system brought gale to storm-force winds across the northern part of the United Kingdom, with the highest hourly mean wind speed reaching hurricane force at the mountain summits (Ref. 3). In Australia, the summit of Mount Wellington in Tasmania is often affected by high winds, with the maximum gust reaching 200 km/h (Ref. 4). Over the east coast of the United States and Canada, the 'northeaster' associated with low pressure areas may give rise to hurricane-force winds and flooding (Ref. 5).

Historically, the distinction between 'typhoon' and 'hurricane' was not clear-cut. With reference to the book on the 'History of Meteorology in China' (Ref. 6), when the term 'typhoon' started to be used in the meteorological history of China remained uncertain. The term 'hurricane' was adopted in literature prior to or during the Ming Dynasty and the term 'typhoon' had not been used. Starting from the Qing Dynasty, some literature described transient squalls in spring as 'hurricanes' and the more persistent strong winds in summer as 'typhoons'.

In Hong Kong, historical literature suggested that the terms 'typhoon' and 'hurricane' had been used interchangeably. For example, in the Local Storm Signal Code published by the Observatory in 1950 (Figure 2), the No. 10 Signal was known as the 'Typhoon' signal, meaning hurricane-force or typhoon winds of 64 knots (118 km/h) or above. Starting from the mid-1960s to 1970s, the Observatory started to conform to the practice of using 'typhoon' in the intensity classification of tropical cyclones and 'hurricane' for describing wind strength at a certain location.