The sea-level rises and falls every day, a daily event called tides, that is of great interest to many people especially mariners and those on fishing sports.  Sometimes, the sea-level can exceed the normal limits and behave extraordinarily.  During the passage of a tropical cyclone, the associated strong winds pile up the sea water near the coast causing a surge of the sea-level (Figure 1).  To a less extent, the low atmospheric pressure of the tropical cyclone also uplift the sea surface on its path (Figure 2).  Such phenomenon is called storm surge.  If storm surge occurs during astronomical high tide, the sea can rise to a high level and flood low-lying areas. 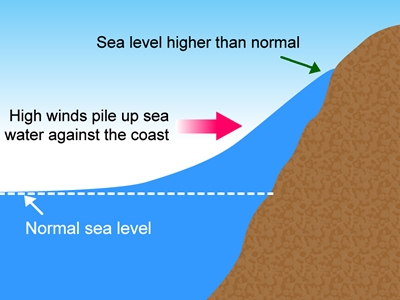 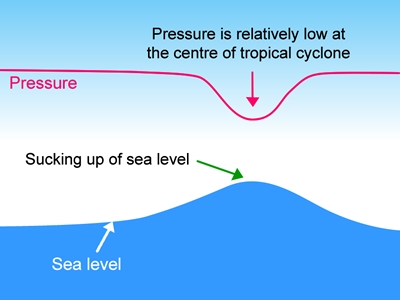 On 23 September 2008 evening, Typhoon Hagupit skirted southwest of Hong Kong under a local No. 8 Gale or Storm Signal.  The Observatory issued a warning on storm surge to alert members of the public on the threat of sea flooding over low-lying coastal areas.  The storm surge rode on high tide.  At around 1 a.m. on 24 September, the sea-level at Victoria Harbour reached a maximum of 3.53 metres (Figure 3), the highest level since Typhoon Wanda in 1962.

People living or working in low-lying areas should always be alert on the sea-level and pay heed to the warnings issued by the Observatory.  Moving to a safe place on the high ground would be a safety precaution when necessary.