Changes in Typhoon Nuri during landfall in Hong Kong

Changes in Typhoon Nuri during landfall in Hong Kong

Since 1960, about 18 tropical cyclones have made their passage over the territory of Hong Kong.  Amongst them was Super Typhoon Hope in 1979.  Hope made landfall over the eastern part of the New Territories and its eye was clearly discernible on the Hong Kong Observatorys weather radar before landfall (Figure 1).  Another example was Typhoon Nuri in 2008 which passed very close to the Hong Kong Observatory Headquarters.  Nuri made landfall over the eastern part of Hong Kong and weakened into a severe tropical storm on 22 August 2008.  Radar observations indicated that its eye was not well organized then (Figure 2).  Moreover, the circulation of Nuri re-organized itself resulting in complicated changes in its track which could be accurately determined from the network of automatic weather stations operated by the Hong Kong Observatory. 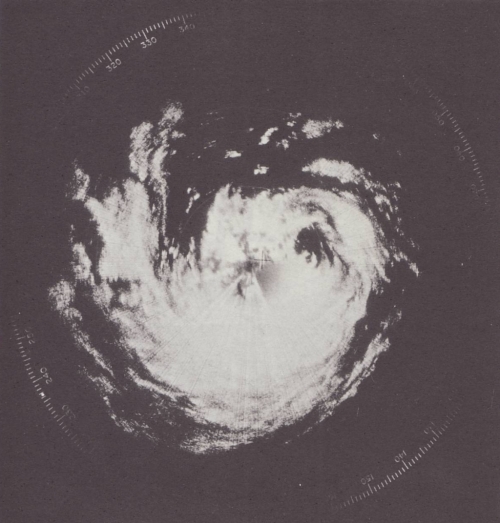 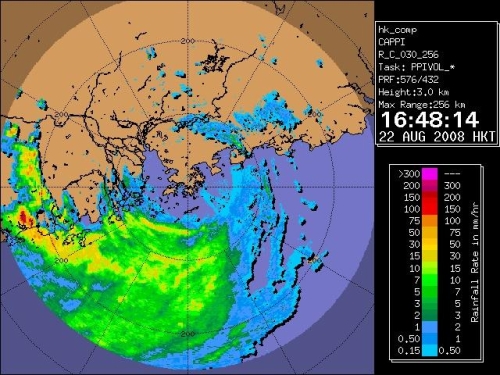 The track of Typhoon Nuri over Hong Kong is shown in Figure 3.  Nuri moved northwestwards over the northern part of the South China Sea on 22 August and made landfall near the Hong Kong University of Science and Technology in Sai Kung that afternoon.  As the pressure is low near the centre of a tropical cyclone, the winds spiral inwards towards the centre in an anticlockwise direction (in the southern hemisphere, the rotation is clockwise).  When Nuri was about to make landfall, winds over the northeastern part of the New Territories were east to northeasterlies, with southwesterlies over the southeastern part of Hong Kong and northerlies over other parts of the territory (Figure 4). 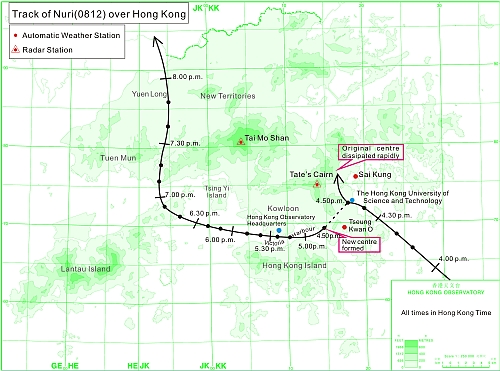 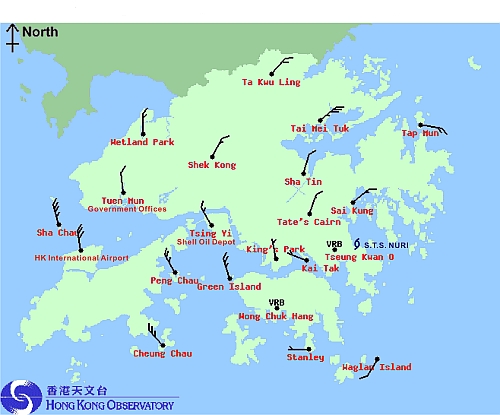 After making landfall, Nuri was affected by mountains to the northwest of its centre and its circulation re-organized itself. The original centre moved northwestwards and dissipated rapidly.  A new centre soon formed near Tseung Kwan O (Figure 5) and turned to move westwards across the Victoria Harbour.  Winds at Tseung Kwan O changed from northerlies to light winds, and then becoming east to southeasterlies.  As the cyclonic circulation of Nuri passed through Hong Kong, many weather stations recorded the turning of wind direction and a temporary decrease in wind speed. 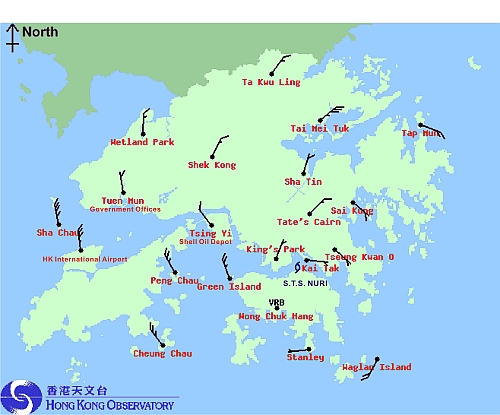 The Observatory operates two Doppler weather radars, one at Tai Mo Shan and another at Tates Cairn.  A Doppler radar is capable of measuring the approach (or departing) speed of raindrops, providing indirectly information on the radial wind speeds.  With both radars operating at the same time, they can provide information on the upper-level winds.  Before the landfall of Nuri, the dual Doppler radar winds showed that there were two circulation centres at an altitude of one kilometre (Figure 6), one centre near Tates Cairn and another over the southern part of Hong Kong Island.  The centre to the north persisted for a while before dissipating, while the centre to the south remained to the southwest or west of the surface centre, indicating that the centre of Nuri was tilting to the west or southwest in the vertical as it passed through Hong Kong.  Thus, Nuri did not possess a distinct and vertically aligned eye as in a well-developed tropical cyclone, such as that shown in the radar image for Super Typhoon Hope in Figure 1.  The complicated track of Nuri over Hong Kong was the result of a weakening tropical cyclone interacting with the terrain. As a summary, minute-by-minute surface wind and pressure information from automatic weather stations is very useful in determining the tracks of tropical cyclones passing through Hong Kong, enabling the accurate tracking of weaker tropical cyclones without a distinct eye.