Movement of tropical cyclones could be predicted with numerical weather models.  However, as different models often give different predictions (as shown in Figure 1), it is necessary to develop a method to decide on the tropical cyclone forecast tracks scientifically.

The Observatory started employing ensemble method for forecasting tropical cyclone tracks back in 2002, and has since accumulated almost ten years of experience.  It was observed that ensemble forecast on average performs better than individual models.  The basis of ensemble forecast is to take the average of the latitudes and longitudes of the forecast positions of all model forecasts as the forecast positions.  Members of the ensemble adopted by the Observatory include models from Japan Meteorological Agency (JMA), European Centre for Medium-Range Weather Forecasts (ECMWF), United Kingdom Meteorological Office (UKMO), and National Centers for Environmental Prediction (NCEP).  Members are weighted equally and any member that deviates significantly from others may be taken out before averaging.

While the use of ensemble forecast improves the accuracy of tropical cyclone forecast tracks, there are certain limitations in operations:

To solve the third problem, the Observatory introduced the use of motion vector consensus in 2009.  This method treats the next 24-hour movements of each model forecast as a motion vector, then takes the average of the motion vectors and applies the resultant vector onto the actual position to obtain the 24-hour forecast position, and so forth for the 48-hour and 72-hour forecast positions.  In addition to eliminating unreasonable movement, it also helps improve the accuracy of forecasts. 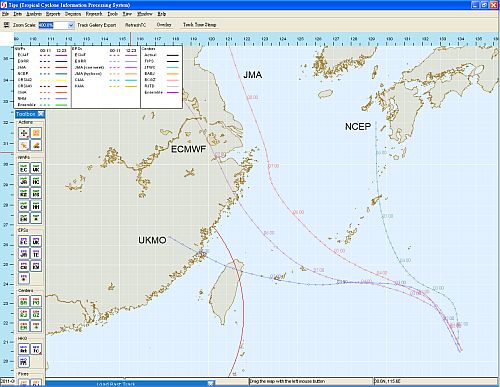 Figure 1.  Forecast track of Super Typhoon Muifa on 1 August 2011 by various models.  While UKMO predicted that it would make landfall over Fujian, NCEP forecast that it would move towards Kagoshima of Japan, indicating that tropical cyclone forecast tracks from different models could vary significantly.

Forecast positions according to different models could differ significantly, and are sometimes clustered into two or more groups.  Simply averaging the positions may lead to unreasonable forecast tracks.  Currently, forecasters would, based on their professional judgment, subjectively decide whether to remove individual model(s) based on the majority of model outputs and the prevailing synoptic pattern.

As the ensemble is based on the average of individual models, it may inherit a large error when most models are giving a wrong prediction concurrently.