From time to time, you may notice that two or more tropical cyclones are mentioned in the same weather bulletin provided by the Observatory.  How often will this occur in our region?  What will be the behaviour of the tropical cyclones under such a scenario?

Over the western North Pacific and the South China Sea, the occurrences of multiple tropical cyclones are most common during summer and autumn.  From time to time, the Intertropical Convergence Zone (ITCZ) near the Equator becomes active and more than one tropical cyclone may form along the ITCZ.  Cases of two tropical cyclones co-existing simultaneously are not rare.  One such case was Severe Tropical Storm Nock-ten and Tropical Storm Muifa over the northern part of the South China Sea and the western North Pacific respectively on 28 July 2011 (Fig.1).   Occurrences of three or more tropical cyclones co-existing at the same time are not quite as often.  Recent examples, based on the Observatorys records, are listed in Table 1.

It is known that two tropical cyclones coming within about 1 000 km of each other will undergo the Fujiwhara Effect (Ref. 1) and rotate around each other.  On the basis of similar mechanisms, cyclone tracks will also reflect such interaction in the case of multiple tropical cyclones.  Their behaviour can be illustrated by the example below.

On the morning of 9 August 2009, three tropical cyclones, Tropical Depression Goni, Typhoon Morakot and a tropical depression (which later intensified into Tropical Storm Etau) co-existed over the western North Pacific and the South China Sea (Fig.2).  Typhoon Morakot, travelling across the Taiwan Strait, was a dominant feature on the weather map with its large circulation (Fig.2) and an estimated maximum sustained wind of 120 km/h near its centre.  Meanwhile, Goni was located near Hainan Island and was a relatively small feature on the weather map, with an estimated maximum sustained wind of 55 km/h near its centre.  Under the influence of the large circulation of Morakot, the direction of Gonis movement changed abruptly from southwestwards to eastwards (Fig.3).  Satellite images that morning indicated that the circulation of Goni was rather weak and its eastward-drifting circulation centre could only be tracked by the low level cloud lines on the visible satellite image (Fig.4).  The brighter cloud mass of deep convective clouds was sheared off away from the centre of Goni to the west of Hainan Island.  As Goni moved further eastwards that afternoon, it dissipated over the northern part of the South China Sea.  By that evening, its low-level remnant circulation was effectively integrated into the circulation of Morakot (Fig.5).  This illustrates the fact that apart from the erratic tracks, there is also a chance that the weaker tropical cyclone will be captured and absorbed into the circulation of the more intense one as the distance between them decreases.

On the other hand, Tropical Storm Etau over the western North Pacific maintained a relatively far away distance from Typhoon Morakot and no interaction between them could be observed. 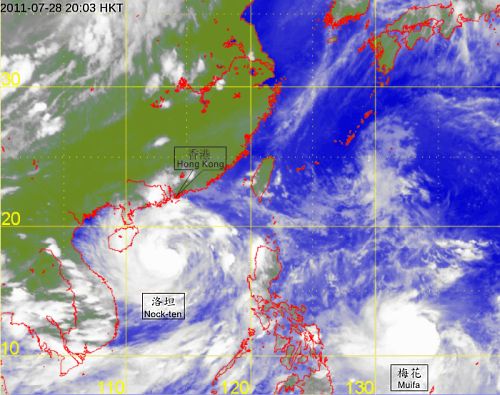 Fig.1  Infra-red satellite image of Severe Tropical Storm Nock-ten and Tropical Storm Muifa at 8 p.m. on 28 July 2011. (The image was originally captured by the MTSAT satellite of Japan Meteorological Agency) 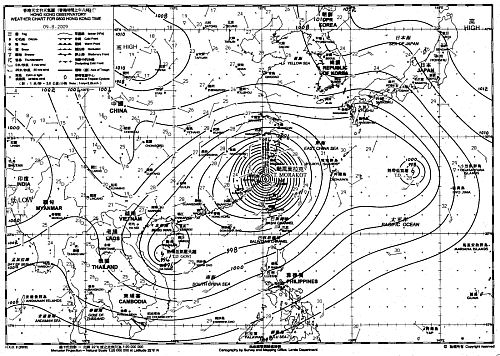 Fig.3   Tracks of the three tropical cyclones Goni, Morakot and Etau in August 2009 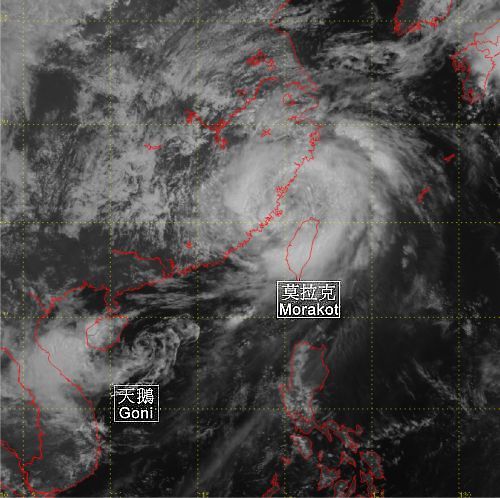 Fig.4  Visible satellite imagery at 11 a.m. on 9 August 2009 showing the relative positions of Typhoon Morakot and Tropical Depression Goni. (The image was originally captured by the MTSAT satellite of Japan Meteorological Agency) 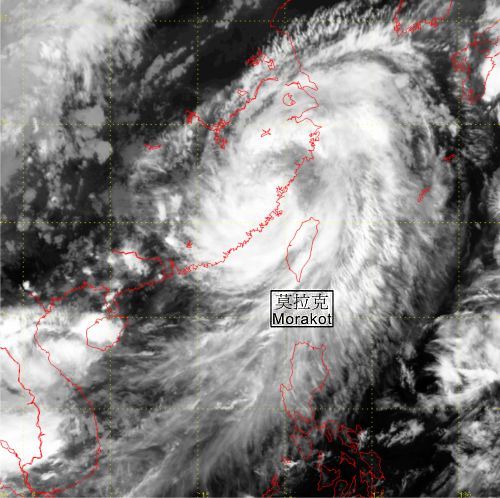 Fig.5  Infra-red satellite imagery of Typhoon Morakot at 8 p.m. on 9 August 2009. (The image was originally captured by the MTSAT satellite of Japan Meteorological Agency)