Under the stipulation of the International Civil Aviation Organization (ICAO), a Meteorological Watch Office (MWO) is responsible for issuing significant weather information (SIGMET) concerning the occurrence or expected occurrence of specified en-route weather phenomena which may affect the safety of aircraft operations.  The MWO is required to follow the Asia/Pacific Regional SIGMET Guide in the issuance of SIGMET.

In Hong Kong, the Airport Meteorological Office (AMO) of the Hong Kong Observatory is a MWO responsible for issuing SIGMET on hazardous weather including tropical cyclone, thunderstorm, turbulence, icing and volcanic ash cloud when it is affecting or is expected to affect the Hong Kong Flight Information Region (HKFIR) over the northern part of the South China Sea.  As SIGMET contains warning information, it is of the highest priority among other types of meteorological information in the dissemination through dedicated channels so as to ensure timely transmission to the pilots.

Whenever a tropical cyclone (TC) of tropical storm intensity or above is affecting the HKFIR or is forecast to enter the HKFIR within the following 12 hours, the Aviation Forecaster at the AMO will issue a TC SIGMET for the tropical cyclone. The TC SIGMET contains information on the observed position and/or the forecast position of the TC, the vertical and horizontal extent of its associated cumulonimbus clouds, the direction and speed of movement as well as the forecast TC position for the next 6 hours.  Examples of TC SIGMET in text and graphical format for tropical cyclone Nock-ten in July 2011 are given in Figure 1 and 2 respectively. 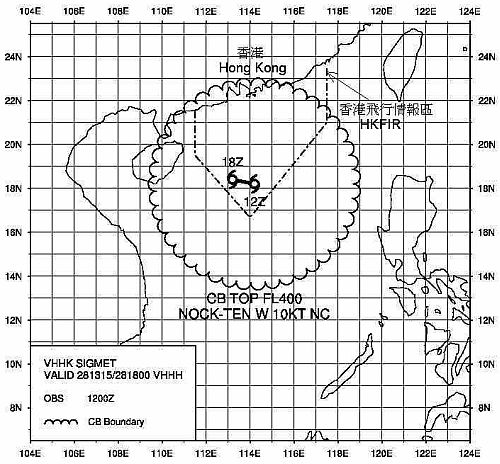