The discrepancy between intuition and research findings

Intuitively, most people tend to believe that the Earth would be warmed by more light and heat radiated from the sun during its active stage at the period of solar maximum, and that decreasing solar activities would reduce the total solar energy output and cool down the Earth. However, atmospheric physicists, Joanna Haigh and her colleagues at the Imperial College London recently found that solar radiation affects Earth's surface climate in the opposite way, at least during the few years (2004-2007 during sunspot cycle 23) of solar activity recession before the solar minimum in 2008 (Figure 1). Their findings are published in Nature, October 2010.

The spectral changes seemed to have altered the distribution of ozone in the atmosphere. They showed that the stratospheric ozone concentration decreased below an altitude of 45 kilometres above sea level during the period 2004-2007, but the ozone concentration increased above this altitude.

Fig.2  Ozone is usually most abundant near the mid (or lower) stratosphere.

What is "radiative forcing"?

In the "Intergovernmental Panel on Climate Change" (IPCC)'s report, "radiative forcing" is further defined as the change relative to the year 1750 (the pre-industrial era). It often refers to a global and annual average value.

Besides "radiative forcing", what is the possible climatic effect associated with the "ozone response"?

Possible effects of producing weather anomalies on the Earth's climate?

Haigh's findings have drawn other scientists' attention and aroused discussions. If the warming and cooling effects on earth could be out of phase with the solar activity and the ozone-related "radiative forcing", in what ways would the processes in the troposphere and stratosphere modulate the Earth's climate? In response to Haigh's findings, another scientist, Quirin Schiermeier, has reiterated some meteorologists' belief that "blocking events" may occur more frequently during phases of low solar activity.

Fig.3  A blocking weather system consisted of a blocking High and a cut-off Low appeared west of the north Asia on the 500 hPa upper-air weather chart on 22 January 2008. Meanwhile, a deep westerly trough with an embedded Low appeared in the east of north Asia.

What is a "blocking event"?

Figure 3 shows a typical "blocking event", during which there is a "blocking system" consisting of a blocking high (on the pole-ward side) and a cut-off low. The pattern of the associated height field nearby the blocking high resembles the shape of a Greek letter [ (Omega). A cut-off low is a closed cold core low completely detached from the upper-air westerly air-stream.

A blocking system is a slow moving or nearly stationary large weather system. The upper-air westerly air-stream (in east) ahead of it forms a significant wavy flow or deep trough as being distorted by the blocking system. The dry, rainy, snowy or cold weather in different regions affected by such kind of large quasi-stationary weather system and the associated deep trough could persist for many days. Furthermore, the collapse of a blocking system could also release a large pool of extreme cold air southward. If "blocking event" and collapse of "blocking system" occur frequently, the possibility of regional extreme weather like snow damage and very cold weather will increase.

So, "Blocking events" are unusual patterns of upper-air (e.g. on 500 hPa level) westerly jet stream in the upper troposphere that can cause intervals of cold spell and abnormal weather. Since solar activity is cyclic in about every 11 years, it should have no long-term impact on climate. Haigh's findings may provide some clues on understanding and quantifying natural climatic fluctuations.

In addition to the more than expected decline of solar ultraviolet flux, ozone reduction at an altitude of the stratosphere below about 45 km above sea level might cool down part of the stratosphere above the tropopause (Figure 2). Would it imply subsequent interactions between the stratosphere and the troposphere to cause abnormal upper-air jet streams, leading to "blocking situations" pushing the polar cold air to persistently move southward (Figure 3), resulting in regional extreme weather on earth surface?

The solar activity was low during the minimum sunspot period in recent years. Exceptional cold weather had occurred in winter of some regions albeit average global temperatures is rising. For example in early 2008, south China suffered from a severe snowstorm while Hong Kong experienced the longest cold spell since 1968 (Figure 4). Since 2008 is a year of solar minimum, could it have any relationship with the exceptional cold weather event? Or, could the La Nina event that occurred between late 2007 and mid 2008 be an alternative cause for the cold weather event? ... To better understand and answer these questions, scientists need more data for further studies. 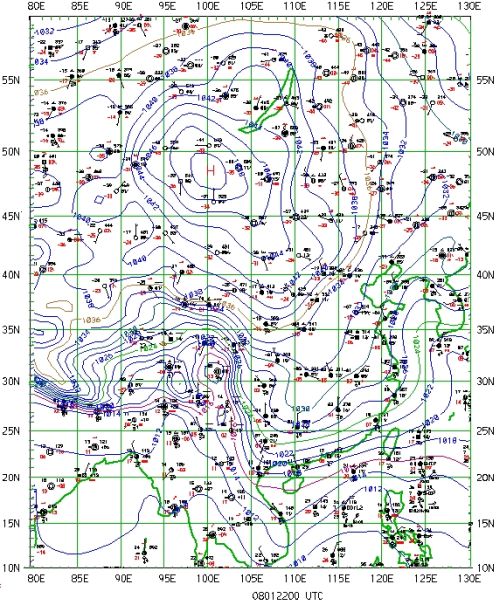 Fig.4  A persistent strong and large High pressure system affected most regions in East Asia, during the long cold spell in early 2008. Its centre once appeared near Mongolia on 22 January 2008.