The Revelation of a Thinning Martian Atmosphere

The Revelation of a Thinning Martian Atmosphere

The National Aeronautics and Space Administration of the United States launched the "Mars Atmosphere and Volatile Evolution Mission" (MAVEN) in November 2013 with an objective of studying the losses of the Martian atmosphere and water to outer space. After entering orbit around Mars in September 2014, the MAVEN's operating spacecraft found that the Martian atmosphere was eroded by the solar wind. Relevant measurements indicated that solar wind stripped away gases at a rate of about 100 gram per second[1]. This atmospheric erosion was even more serious during solar storms (Fig. 1). 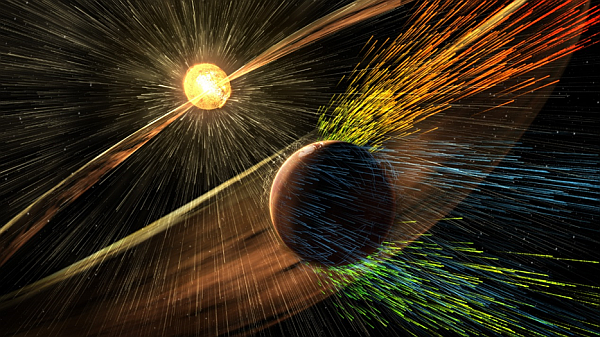 Figure 1   Artist's rendering of a solar storm hitting Mars and stripping away its gases in the upper atmosphere (Source: NASA's Scientific Visualization Studio and the MAVEN Science Team)

People have long been speculating about the possibility of life on Mars. Mars has polar ice caps which may contain water, and there are also features resembling valleys carved by rivers on its surface. The early Martian climate might be warmer and wetter, possessing the essential ingredients for supporting life. This was very different from Mars today as it is now basically a cold and arid planet. The MAVEN project revealed that as Mars lacked a global magnetic field, it was exposed to the invasion of solar wind which crashed into the Martian atmosphere and stripped away its gases. The surface pressure of Mars is less than 10 hPa[2],[3] which is about one hundredth of the Earth's atmospheric pressure at the mean sea level. Since the Martian atmosphere became thinner, any liquid water on the surface would then be lost.

Although our living Earth has a global magnetic field that protects us from the impact of solar wind, studies showed that the Earth's magnetic field could reverse, so that the positions of magnetic north and magnetic south would interchange. This "geomagnetic reversal" phenomenon was discovered in the 1960s when scientists studied the seafloor magnetism and noticed normal and reversed polarity of magnetic stripes alternating across the mid-ocean ridge on the oceanic crust[4]. The stripes emerged symmetrically on two sides of the mid-ocean ridge[5] (Fig. 2). During seafloor spreading, volcanic activity erupted new volcanic rocks near the crest of the mid-ocean ridge and they gradually moved away from the crest on both sides of the ridge. The fresh rocks would be magnetized with a polarity that followed the Earth's magnetic field at the time. The magnetic stripes showing normal and reversed polarity reflect the change of geomagnetic polarity with time. 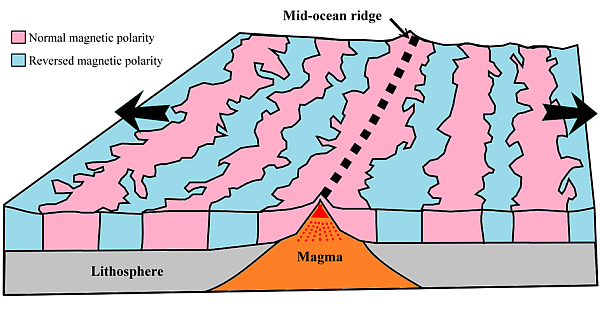 Figure 2   Normal and reversed polarity of magnetic stripes alternate across the mid-ocean ridge. Magnetic polarity is normal at the ridge crest but reversed in symmetrical pattern away from the ridge's axis

Based on paleomagnetic research, some scientists estimated that polarity transition could take place in a long time span from around one to ten thousand years, but some others also suggested that the duration of this process could be much shorter[6]. There is also a hypothesis that the Earth's magnetic field will weaken substantially during reversals, such that it's atmosphere may be invaded by solar wind just like the situation in Mars. High energy particles from solar wind may bring climate change and damages to lives on the Earth. Yet there is no concrete evidence to indicate a direct link between geomagnetic reversal and mass extinctions. What are the causes of geomagnetic reversal and what are its impacts on the biosphere? To answer these challenging questions, more in-depth researches by scientists have yet to be done.