How is Space Weather Monitored? The Latest Prediction of Soloar Activity

How is Space Weather Monitored? The Latest Prediction of Soloar Activity

Solar phenomena, such as the sun spots and solar flares, provide good indications of space weather. In particular, the intensity of x-ray and ultraviolet radiation from the Sun provide valuable information for space weather forecasting.

Space weather can be observed from the ground and from space. On the ground, telescopes and optical instruments are used to record the number of sun spots, as well as to observe aurora, which provide evidence of geomagnetic storms.

Observation from the ground is affected by the Earth's atmosphere and weather. Observation from space does not have such a limitation. In recent years, satellites and spacecraft have been used to monitor the space weather. These include: Advanced Composition Explorer (ACE), Solar and Heliospheric Observatory (SOHO), Transition Region And Coronal Explorer (TRACE), and Geosynchronous Operational Environmental Satellite (GOES). Details are as follows.

ACE was launched in 1997 by the United States. It is capable of measuring the composition of charged particle from the Sun and the interplanetary magnetic field. It gives us important information on the materials released during solar events.

A cooperation between European Space Agency (ESA) and National Aeronautics and Space Administration (NASA), SOHO was launched in 1995 to study solar wind and the internal structure of the Sun.

Images of the Sun taken by SOHO, showing a significant increase in solar activity over the three years from 1997 to 1999(Source/Credits: SOHO (ESA & NASA))

TRACE was launched in 1998 by the United States. It aims at studying the evolution of magnetic field structures of the Sun.

Image taken by TRACE, showing a magnetically active region at the edge of the Sun(Source/Credits: TRACE)

The GOES Solar X-ray Imager operated by the United States is capable of monitoring solar flare events. An explosive development of solar flare on 20 January 2005 can be seen below.

Knowledge of the Sun's structure and the solar system's formation gives us clues to space weather. The Genesis spacecraft was launched in 2001 to collect the solar wind particles. Its sample-collection capsule returned to the Earth on 8 September 2004. Despite a crash due to failure of the parachute system, a significant amount of the samples were recovered. Study of the solar wind particles will help our understanding of the origin and evolution of the solar system. 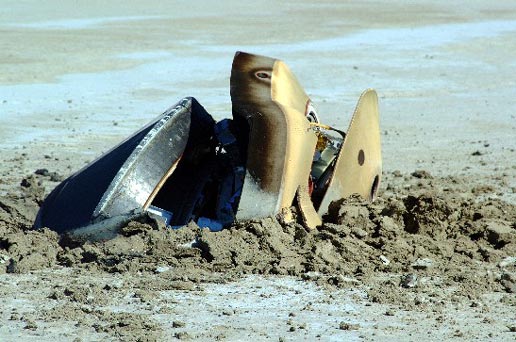 The Genesis capsule crashed on its return to the Earth on 8 September 2004(Source/Credits: National Aeronautics and Space Administration)