Is there an antidote to radiation!?

Is there an antidote to radiation!? 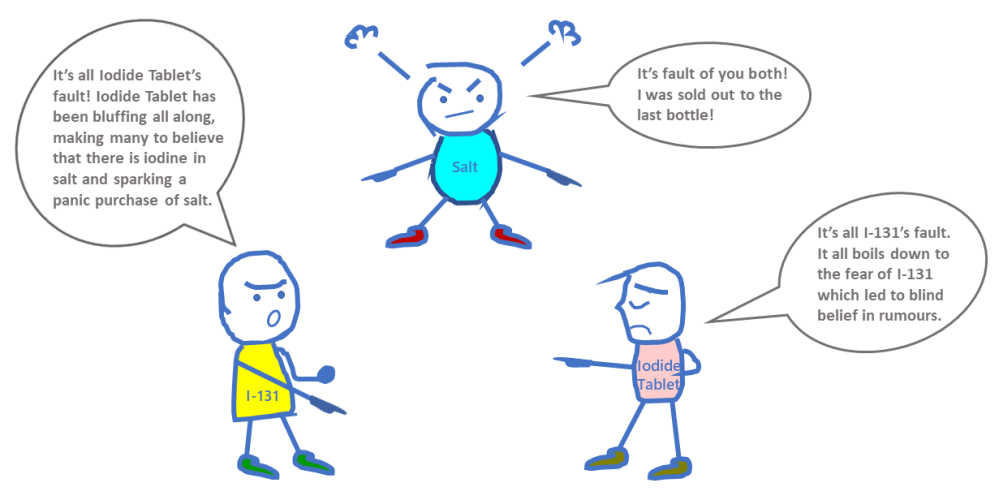 Tsunami associated with the intense earthquake in Japan in 2011 triggered a nuclear accident at the Fukushima Daiichi Nuclear Power Plant. Rumours saying that “salt could resist radiation” spread quickly in Hong Kong back then. What is the origin of these rumours? What are the correct ways to handle such situation? Let’s find out the answers to these questions.

Salt: “Shortly after the Japan earthquake of 2011, there were Internet rumours claiming that the radioactive substances leaked from the Fukushima Nuclear Power Plant could possibly disperse to Hong Kong following wind flow. These rumours subsequently sparked a panic purchase of salt in the territory. Why did people think that taking salt could resist radiation? Eventually I was sold out to the last bottle at that time!”

Radioactive iodine: “Perhaps people were worried about the radioactive iodide leaked from the nuclear power plant. Maybe they heard about the application of iodide tablet in nuclear emergency and mistakenly believed that all iodine-bearing substance is an antidote to radiation.”

Salt: “Why are we concerned about radioactive iodine during nuclear emergency? What is the principle behind the application of iodide tablet?”

Salt: “Now I understand the origin of the rumours. Many people probably thought that salt contained iodine and hence the rumour of “eating salt to resist radiation” spread. In fact, most of salt available in Hong Kong is not iodized. Even if the salt is iodized, its iodine content is very low and one has to eat several kilograms of iodized salt a day to absorb the equivalent dose of iodine in an iodide tablet. However, consuming such an excessive amount of salt is harmful to health, especially for those who suffer from high blood pressure, heart or kidney disease.”

Iodide Tablet: “We also need to understand that iodide tablet is only a thyroid blocking agent and is not an antidote to radiation. It does not protect against radioactive substances other than radioactive iodine, nor does it protect against external radiation. In addition, one must take iodide tablet before or shortly after exposure for maximum effectiveness. Moreover, taking additional doses will not give additional protection and larger doses will increase the risk of side effects. People with certain medical conditions should not take blocking agent. Therefore, iodide tablets should not be taken causally, and should only be taken as recommended by the Government.”

Radioactive iodine: “In conclusion, if an accident occurs in a nuclear power plant, don’t panic and remain calm. Depending on the wind and weather conditions, the radioactive plume from a brief leakage of radioactive substances may pass through the area very quickly. In this situation, sheltering (staying in a house or building with windows and doors closed and outside air vents shut) would provide the best protection. Meanwhile, one should also listen to television and radio broadcast, or browse the Daya Bay Contingency Plan website, for information of the emergency.