The Observatory's Radiation Laboratory received ISO 9001:2008 accreditation of the International Organization for Standardization for its radiation measurement services this year. This is a recognition that the quality management implemented in the Radiation Laboratory had met the international standard. One of the most important management tasks is the inspection of radiation safety in the laboratory. This article introduces the equipment currently used in the laboratory for monitoring the radiation level of the worker and the indoor environment. 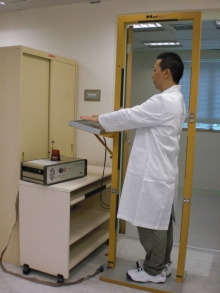 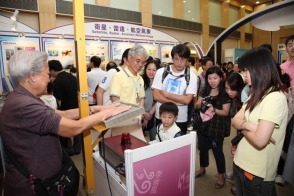 In addition to monitoring the radiation level of the laboratory workers, the inspection of the ambient environment inside the laboratory is also important. A work area monitor is used to detect radiation in this case. When radiation passes through the Geiger tube in the monitor, it ionizes the gas inside and produces electric current pulses. The pulse frequency is counted by electronic equipment and the radiation intensity can then be calculated and shown on the monitor. When the detected radiation level of the laboratory exceeds a preset warning limit, the monitor will give an audible alarm. Depending on the nature of work in the laboratory, different models of Geiger tube are used with the work area monitor to detect different types of radiation such as alpha, beta or gamma radiation. 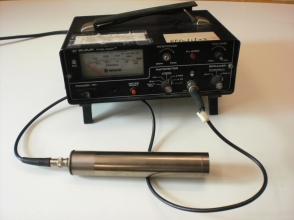 The Observatory uses a portable survey meter to check the surface contamination of laboratory worker and facilities such as table, floor and telephone. Inside the survey meter, there is a proportional counter tube for radiation detection. It works on a similar principle as the Geiger tube, but with different gases and a lower operating voltage. The gas inside the tube will be ionized by radiation and produce current pulses. In addition to the calculation of radiation level based on the number of pulses, the proportional counter tube can also distinguish between the types of radiation according to the properties of the gas inside. The Observatory currently uses the alpha and beta particle counting tube, which contains butane gas, to detect surface contamination.