Following the accident, the Hong Kong Observatory stepped up its environmental radiation monitoring activities in Hong Kong, including the measurement of artificial radionuclides in airborne particulates.  The frequency for collecting air samples was increased from weekly to daily.  Minute amount of iodine-131 was first detected from the air sample collected between 26 and 27 March 2011 (noon to noon) at the King's Park Meteorological Station.  With iodine-131 being a fission by-product in the process of nuclear power generation, it was reasonable to assume that the iodine-131 detected in Hong Kong might have originated from Fukushima.  The dispersion of radioactive substances was of course closely related to changes in the atmospheric conditions.  With the NPP at a distance of more than 3,000 kilometres away, a rather intriguing question was how the radioactive substances from Fukushima managed to travel all the way to Hong Kong.

Figure 1 shows the trajectories of air masses starting on the afternoon of 12 March 2011 and originating from altitudes of 50, 500 and 1,000 metres above ground level at the NPP, as simulated by the National Oceanic and Atmospheric Administration (NOAA) HYSPLIT model[1].  Initially, the air masses at all altitudes followed the westerlies towards the Pacific and North America.  However, the air mass originating from the near-surface altitude of 50 metres  apparently got caught up in a developing cyclonic system near the Bering Sea.  Under the influence of this cyclonic circulation, the air mass rotated in an anti-clockwise motion and subsequently moved towards the eastern part of Russia on 17-18 March.  It then entered northeastern China following the northerly flow along the western flank of the cyclonic circulation.  With northeast monsoon prevailing over mainland China from 23 to 26 March, it was hypothesized that the radioactive substances in the air mass were transported by the low-level northerly winds from northeastern China to the coastal region of southern China.  Based on the above meteorological analysis, Figure 2 is a schematic diagram illustrating the probable trajectory from Japan to Hong Kong taken by the radioactive substances. 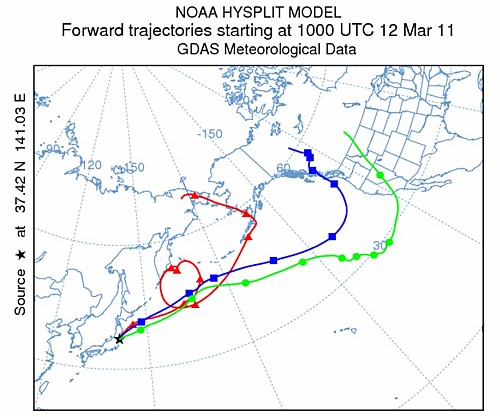 Figure 1: Trajectories of air masses released at heights of 50, 500 and 1,000 m (red, blue and green colours respectively) above ground level from the Fukushima NPP starting at 10 UTC 12 March 2011, as computed by the NOAA HYSPLIT model.  The time interval between two successive dots is 24 hours. 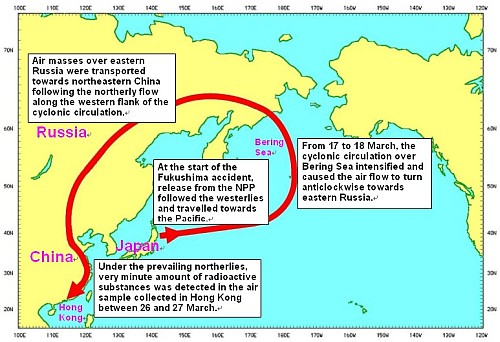 Figure 2: Schematic diagram showing the hypothesized trajectory for the transport of radioactive substances from the Fukushima NPP to Hong Kong.