When talking about radiation, we often think of X-ray, an ionizing radiation, which is used in medical scans. Besides medical applications, X-ray is closely related to the development of Archaeology too. Radiation technology can be used to determine the age of cultural relics and artworks and applied for the conservation and preservation of cultural objects.

X-ray is a kind of electromagnetic ray. One of the radiation technologies used in Archaeology is X-ray Fluorescence (XRF) Spectroscopic Analysis. XRF can be used to determine the chemical composition of artworks. When a sample is irradiated by an incident X-ray (primary X-ray), the elements which are present in the sample will be excited. Each element will produce fluorescent (or secondary) X-ray with unique energy and wavelength features. Therefore, the composition and amounts of chemical elements in the sample can be investigated by examining the yield and energy level of the fluorescent X-ray (Figure 1). Such non-invasive technology is widely used because its application will not harm the artwork sample and it can analyse a large number of selected spots in an archaeological or scanned sample within a short period of time (Figure 2). 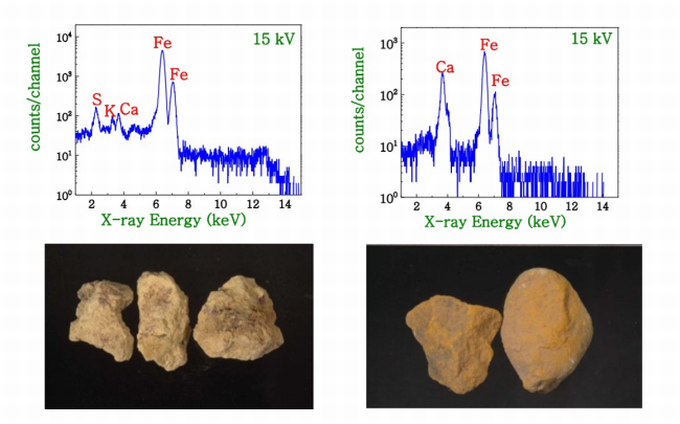 Figure 1   Both Jarosite (left) and Yellow Ochre (right) are raw yellow pigments, but they have different elemental material composition as shown in the result of XRF analysis. Jarosite contains the elements of Potassium (K) and Sulphur (S).
(Source : Institute of Nuclear and Particle Physics, NCRS “Demokritos”) For example, in mural and painting, the formula for pigment making varies in different periods, locations and schools of printing (Table 1). Examining the raw pigments used in the artworks, can not only provide a clear picture about the evolution of technique and material used by artists but also assist in confirming the age of the artworks and the detection of art forgery. For example, if a relatively strong energy response from Copper (Cu) is detected in XRF analysis on a painting surface in green colour, its pigment might contain Malachite which was commonly found in paintings between 4000 BC and 1187 BC. When restoring paintings, XRF technology can also be used to analyse the damage and corrosion of artworks so as to find suitable means to repair and slow down the damage of the artworks, and record their preservation status.

As such, making good use of radiation technology can help us better understand the evolution of art history.