What is cosmic radiation?

Cosmic radiation from outer space is a stream of highly energetic charged particles. Until now its exact origin has not yet been fully understood. In this regard, there are still some controversies among scientists.

How was cosmic radiation discovered?

In 1912, a German scientist, Victor Hess, ascended some 5,000 meters in a balloon and measured changes in the atmosphere. He found that the current detected increased with altitude, which led to his conviction that the current was caused by a strong penetrating radiation from outer space. This sort of radiation was subsequently named "cosmic rays". And because of this discovery, Victor Hess was awarded the honour of Nobel Prize in Physics in 1936.

Cosmic rays consist mainly of highly energetic protons: 85% hydrogen nuclei, 12% α particles, with a small portion of electrons and some heavier atomic nuclei. Cosmic rays travel through space at almost the speed of light, some of which arrive at the Earth.

The impact of cosmic rays on human body

One thing we have to know is that the charge of the highly energetic particles of cosmic rays may be as high as 100 MeV. They can interfere with the normal function of a cell to cause diseases, and therefore pose a threat to the astronauts. If the cosmic rays penetrate the capsule of the spacecrafts, they may also undermine the precision of the instrument, affecting their operations. Therefore, careful planning needs to be taken in every space mission.

How does human body face the cosmic radiation?

While we are living on the surface of the Earth, there is no need to take any precaution against the impact of cosmic radiation.  This is because the Earth has two mechanisms to protect us from cosmic rays' harm: 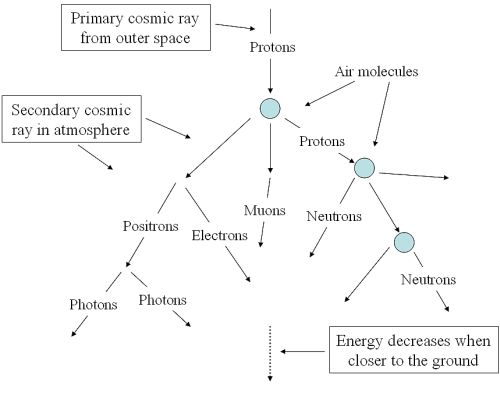 These secondary particles have sufficient energy to produce the next generation particles. By consecutive transformations, a large cluster of particles will be produced.  However, most of these particles will be absorbed or self decayed when entering the atmosphere. Most of the cosmic radiation cannot reach the Earth's surface. The energies of the particles that penetrate to the surface of the Earth will be further reduced when approaching the ground.

Therefore, the atmosphere acts like a barrier to block the high-energy particles. When the cosmic rays reach the Earth's surface, the potential harmful effects have been greatly reduced.

How does the Hong Kong Observatory measure cosmic rays?

To measure cosmic rays at ground level, the most important thing is to minimize the effects of other sources of radiation originating from the land. Therefore, when taking measurement, there are certain requirements to ensure good results:

The Hong Kong Observatory first measured cosmic radiation in 1989 (Tsui et al, 1991). In Hong Kong, an ideal measurement location is at the Plover Cove Reservoir. Since 2000, the Observatory used a fiberglass boat of the Water Supplies Department quarterly to measure, at the center of the reservoir, the gamma dose rate caused by cosmic rays. The equipment used for the measurement was a High Pressure Ionization Chamber (Reuter-Stokes Model RSS-131 portable environmental radiation monitoring system). The measurement time was around 1 hour each time. 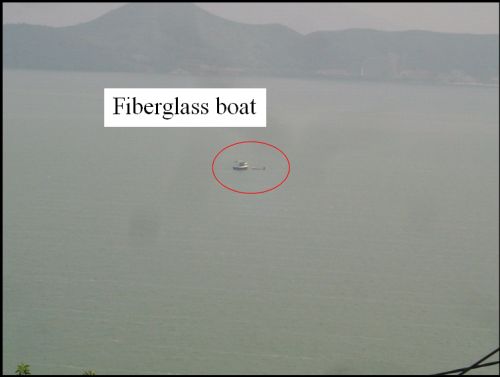 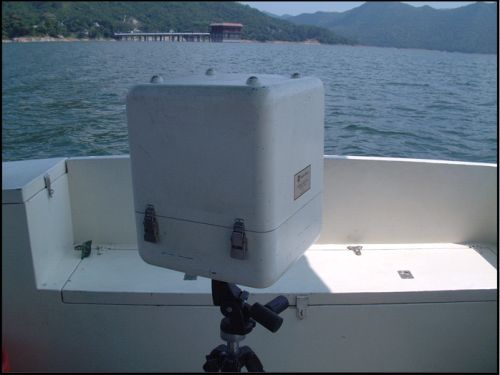 The materials of the equipment and the fiberglass boat together with the radioactive element (potassium-40) inside the human bodies also emit radiation. Therefore, in order to obtain higher precision gamma dose rate due to cosmic radiation, we also eliminate such slight radiation effects by adding an adjustment to the measurements.  Such an adjustment is about -0.0036 µGyh-1.