Variations in the Environmental Radiation Levels around the World

Variations in the Environmental Radiation Levels around the World

After the Fukushima nuclear accident in Japan, public concern about radiation safety has greatly increased. Some people planning to visit Japan would search online for information about the local radiation levels before leaving. Recently, we received some queries on why the environmental gamma radiation level in Tokyo was lower than that in Hong Kong. In this article, we will examine what are the determining factors of the environmental radiation level? How does the radiation level differ in various places of the world? Would there be any health impact arising from these differences?

The Hong Kong Observatory operates a Radiation Monitoring Network of twelve stations to monitor the environmental gamma radiation dose rates in Hong Kong round-the-clock. Real-time data from these stations are available for public consumption at the Observatory's website . From readings taken at various locations in Hong Kong during the period from 1987 to 2011, the background ambient gamma dose rates normally vary between 0.06 and 0.30 microsievert per hour [1].

Significant variations in the environmental gamma radiation level can occur in difference places around the world. For example, the environmental gamma radiation dose rate in Tokyo is around 0.05 microsievert per hour [2]; while the average dose rate in Kerala, India may reach 1.5 microsievert per hour [3]. These variations are mainly caused by the differences in the radioactive content of local rock and soil. In addition, part of the natural gamma radiation comes from cosmic rays from outer space. Since cosmic rays will be attenuated when they travel through the atmosphere, the intensity of cosmic rays varies with latitude and altitude as well.

There are various kinds of natural radiation. In addition to the gamma radiation originated from cosmic rays and emitted by the earth's crust, people may also intake radiation from radon gas in the atmosphere, as well as the radioactive substances in foodstuff. It is estimated that the world-wide average annual dose received by the public from natural background radiation is about 2.4 millisievert. In some places with relatively high background radiation, the annual dose absorbed could be several times or more of the world-wide average [3]. Studies have shown that for radiation dosage within such range, it should have no significant impact to human health (Figure 1). 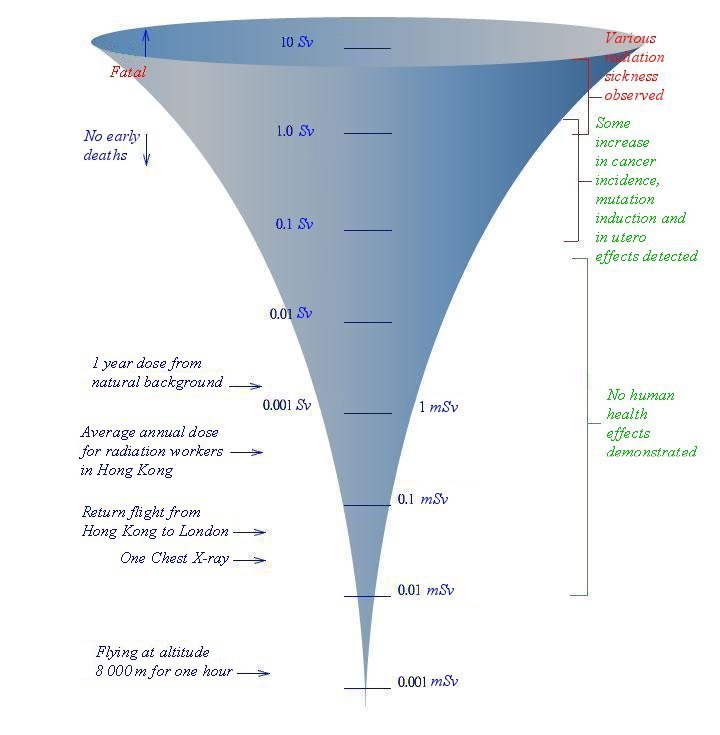