Geostationary satellites are stationary relative to the earth and as such they capture images of the same geographical area on the earth 24 hours a day. Located some 35,800 kilometres above the equator, they take pictures covering almost half the globe.

Polar-orbiting satellites are low-flying satellites circling the earth in a nearly north-south orbit, at several hundred kilometers above the earth. Most of them pass over the same place a couple of times a day. Since they travel at a distance closer to the earth, they are only capable of taking images of a limited area each time. However, the images are of higher resolution than those from the geostationary satellites. In comparison, geostationary satellites offer more satellite images of the same area per day.

Soon after the launch of the Television and Infra-red Observation Satellite (TIROS 8) by the U.S.A. in 1963, the Hong Kong Observatory started using locally designed equipment to receive satellite signals from the Automatic Picture Transmission System (APT) on-board the satellite. The early pictures were displayed on a modified domestic television set.

This equipment was used to receive transmissions from the Environmental Survey Satellite (ESSA) and the National Oceanic and Atmospheric Administration (NOAA) series of polar-orbiting satellites until a photographic recorder was purchased in 1968.

In 1977, Japan Meteorological Agency (JMA) launched the first of a series of Geostationary Meteorological Satellite (GMS) into an orbit 35,800 km over the equator at longitude 140°E. Images in the visible (VIS) and infra-red (IR) channels were available every three hours in analogue facsimile form. In 1979, the Observatory purchased a reception system to receive the high-resolution pictures (HR-FAX) from the GMS. The GMS was subsequently replaced by its successors GMS-2 in 1981, GMS-3 in 1984, GMS-4 in 1989 and GMS-5 in 1995. The transmission mode of the satellite was also changed from analogue facsimile form to stretched-VISSR (Visible Infra-red Spin Scan Radiometer) digital form, and the frequency of transmission increased to provide satellite pictures every hour. To cope with these changes, the Observatory installed a computer-based reception system in 1988. A more advanced UNIX-based reception system was installed in 1996 to receive and analyze additional satellite images of an additional IR channel and a new water vapour (WV) channel from GMS-5.

In mid-2003, the operation of GMS-5 was taken over by the Geostationary Operational Environmental Satellite-9 (GOES-9) of NOAA. The Observatory utilized the satellite reception system for GMS-5 to receive satellite images from GOES-9.

In 2004, the Observatory installed another satellite reception system to receive broadcast from MODIS, an acronym for MODerate Resolution Imaging Spectroradiometer, which is a sensor onboard the Earth Observing Systems (EOS) satellites, namely Terra and Aqua, operated by the U.S. National Aeronautics and Space Administration (NASA). MODIS has 36 observational channels, covering a wide frequency spectrum ranging from visible to infra-red radiation, making it valuable data source for meteorology, oceanography as well as environmental monitoring. The high-resolution images from MODIS are useful for monitoring fine features or phenomena such as hill fire and haze.

In 2005, the first operational geostationary meteorological satellite of CMA, namely Fengyun-2C (FY-2C), was put into operation. Located over the equator at the longitude of 105°E, FY-2C provides imagery of five channels (VIS, IR1, IR2, WV and IR4) covering most parts of Asia, Australia, Indian Ocean and the Western Pacific. The resolution of the VIS imagery is 1.25 km while that of IR and WV imagery is 5 km. The imagery for the Northern Hemisphere is updated as frequent as 30 minutes during rainy and typhoon seasons.

In the same year, the first of the next generation geostationary meteorological satellites of JMA, namely MTSAT-1R, was launched to replace GOES-9. Available at 30 minute intervals, images of MTSAT-1R cover almost the same area as GOES-9. MTSAT-1R satellite provides a new infrared channel (IR4) in addition to the four channels (VIS, IR1, IR2 and WV). The resolution of the VIS imagery is 1 km whereas the IR and WV imagery are at 4-km resolution.

The Observatory receives direct broadcasts from the following satellites round-the-clock to support its weather forecasting and warning services: 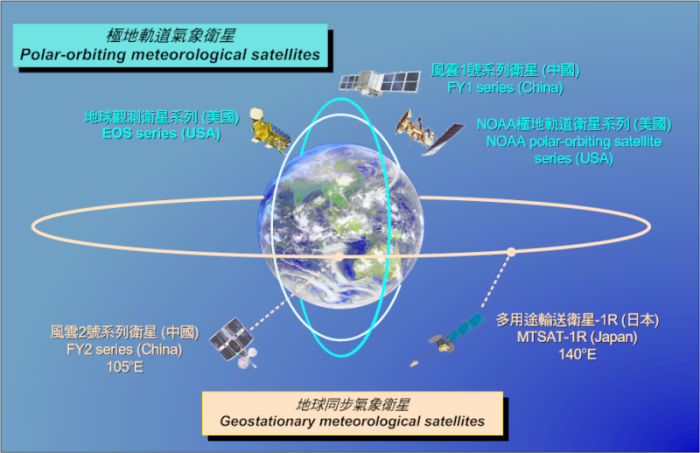 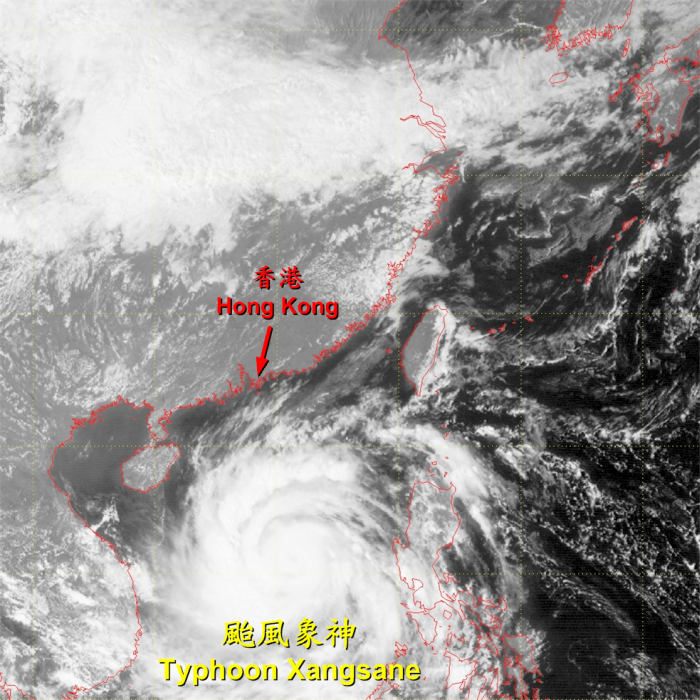