The Power of Trace Materials

2009 is a year in which discussion about climate change is taken to a new height.  There was the World Climate Conference-3 from 31 August to 4 September in which the international community had an unprecedented opportunity to take action for adapting to current and future climate.  In December, there will be the Conference of the Parties (COP), the "supreme body" of the United Nations Framework Convention on Climate Change (UNFCCC), in which important intergovernmental negotiation processes on mitigation and adaptation to climate change will take place.  But at this critical juncture in time, there are still quite a few people out there who are skeptical about climate change, and in particular, about anthropogenic or man-made climate change.  They doubt the ability of mankind to change nature's machinery as enormous as its climate.

To put this important issue in the right perspective, let's make a detour to the ABC of atmospheric science.  In the atmosphere, there are two main kinds of motion of interest to us, one is in the horizontal, and the other is in the vertical.  In July this year, when Typhoon Molave struck Hong Kong, we experienced the full strength of the typhoon with wind speed exceeding 100 km per hour.  This is air motion in the horizontal.  But if we trace back the life history of Typhoon Molave, it started as a tropical disturbance in the Pacific Ocean characterized by a slowly rising air current.  This rising current, or motion in the vertical, is on the average just about 1 km per hour (Fig.1), 100 times weaker than the force of a typhoon.  But it was this weak and seemingly harmless rising current that caused water vapour to rise and condense to form the clouds, thereby releasing latent heat to sustain the atmospheric heat engine we call typhoon.  A slow 1 km per hour rising current can result in a monster typhoon.  The point here is that in the atmosphere, it is often the inconspicuously small quantities that make the difference. 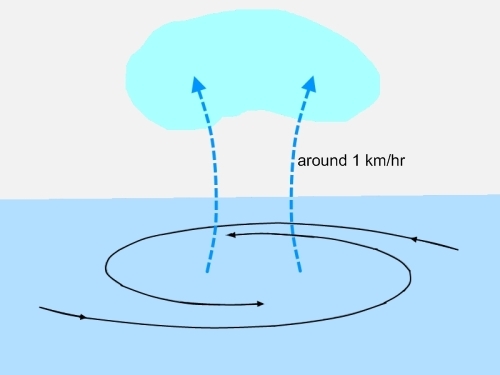 An important but small component of the atmosphere is water vapour. Water vapour in the atmosphere varies from practically zero in the polar regions and the desert to a maximum of about 4% (by volume) in warm, humid tropical areas.  But it is this 'small' amount of water vapour that gives rise to the many fascinating phenomena that the atmosphere exhibits before our eyes.  The rainbow, clouds, storms, halos, rain, snow, sleet, frost and countless others would not have been possible without water vapour.

Returning to man-made climate change, we all know that the main culprit is carbon dioxide, a gas that even at today's level, is less that 400 ppm.  Put in percentage, carbon dioxide is less that 0.04% of all the air in the atmosphere.  This trace gas, as atmospheric scientists use to call it, produces a disproportionately large overall effect to our climate, in much the same way as a small rising air current produces a severe storm.  It is exactly because carbon dioxide constitutes such a small fraction of our atmosphere that human activity can profoundly change its concentration. 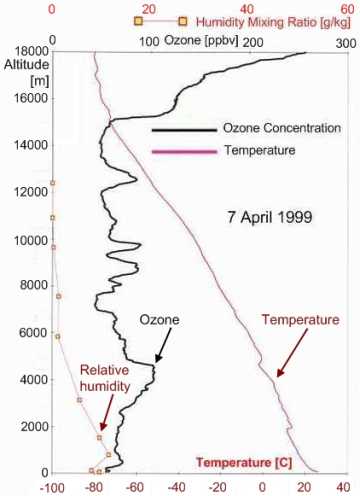 Ozone, another trace gas in the atmosphere (Fig.2), has a concentration ranging from less than 1 to 15 ppm, much less than carbon dioxide.  Such an insignificant component of our atmosphere surprisingly blocks most of the harmful ultraviolet radiation from reaching the ground.  But again, it is because of its small quantity that human activity can produce a large impact, resulting in the ozone hole that we all know about.

In everyday life, there are also examples of the significance of materials that appear in small quantities.  For example, in food safety - a topic that we care about a lot - the culprits of many unsafe foods are just very small quantities of some toxic materials.

Such analogies can go on and on.  But to conclude, my message to climate change skeptics is that we humankind can and do have a significant impact to our climate.  In much the same way that we have the ability to cause global warming, we have the ability to undo the harm.  After all, we have succeeded in the battle against ozone depletion, though in a much smaller scale.

Some of the above information was reproduced from an opening speech delivered by Mr W M Leung at the "Workshop on Climate Projections and the Economics of Climate Change Programme" in August 2009 organized jointly by the British Consulate-General and the Hong Kong Observatory.