Science in coffee and tea

Science in coffee and tea

Why does a coffee (or tea) drop leave a brown ring on the table?

A cup of coffee (or tea) has microscopic brown particles inside it. A coffee drop is no different.

When a coffee drop lands on a table, it spreads out in all directions. The spreading will stops when the liquid reaches a barrier, which may be a small and invisible scratch or ditch on the table surface.

Looking from the side, the puddle will be thick at the centre but thin at the edges. As evaporation occurs, it will dry first at the edges because there is less liquid there. That might cause the puddle to shrink and pull back at the edges, but this is not possible because of surface friction, i.e. the puddle edges are stuck. Thus more liquid has to come in from the centre. This carries with it more brown particles, which end up stranded at the edges as evaporation continues until all liquid is gone.

Is the phenomenon related to surface tension?

The above phenomenon has been explained after detailed mathematical calculations were made by scientists. They found evaporation to be the reason. It thus seems that surface tension has no direct role, and only plays an indirect part in so far as evaporation occurs faster at places where the curvature of liquid surface is larger. At these places, evaporation is faster because a water molecule there has fewer neighbouring molecules to pull it back by attraction, as opposed to, say, a flat surface where the surface attraction is greater because of more molecules in the neighbourhood.

Brown ring is also observed on a table cloth. This can be explained by the process of evaporation, and not surface tension.

Why does a tea bag inflate in hot water?

As the tea bag holds some water in its fabric, this effectively seals the air inside the bag and results in an inflated bag when the temperature rises. 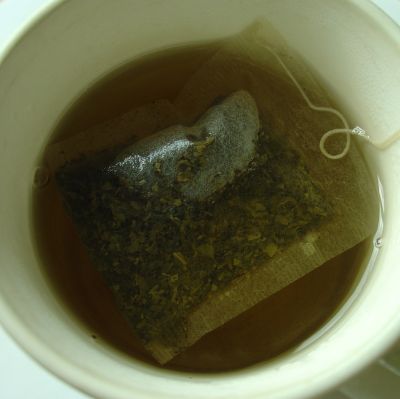 If the water is boiling, a further effect is that the tea leaves inside the bag serve as very good 'nucleation sites' for bubbles of steam to form. If you watch water boiling in a glass container, you may notice that steam bubbles only form at fixed spots on the wall of the container where there are small cracks or crevices. These also are nucleation sites. Please check out "Bubbles in a soft drink" for a similar effect in soft drinks.

Thus, in boiling water, the tea bag inflates mainly because of: i) air expansion, and ii) addition of steam inside the bag.