Let's first look at Figure 1, which shows sun rays entering a water drop and going through refraction and reflection. The ray (ray no. 1) passing through the centre goes directly backward on reflection, i.e. a change in direction of 180 degrees. For ray no. 2, this angle becomes smaller, following the rules of refraction and reflection. For the next (ray no. 3) the angle continues to decrease, so on and so forth. This trend does not continue for long, however. It is found that after a certain ray (ray no. N), the angle starts to increase instead, after going through a minimum angle of 138 degrees. 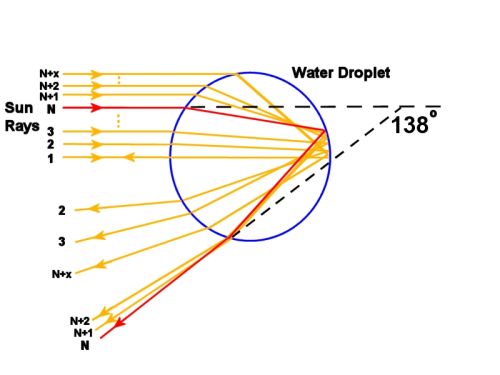 The figure also tells us that the outgoing rays tend to be more concentrated near ray no. N, making that region brightest. In fact, the angle of 138 degrees is the primary rainbow angle.

Now a rainbow is formed from lights coming out of many water drops. In fact, each of the colours in the rainbow comes to the eye from a different set of water drops. Figure 2 makes it easier to visualize. Rays A and B on coming out of the water drop turn through an angle less than 138 degrees, and thus do not reach the eye. They either pass over our heads or to our right or left. On the other hand, such rays as C and D turn through an angle near 138 degrees, and become part of the primary rainbow. This explains the darker region above the primary rainbow. 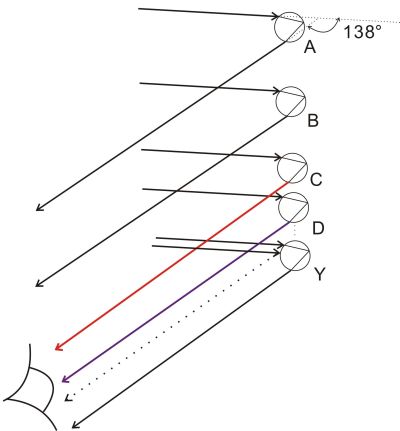 Below the primary rainbow and further down, e.g. ray Y, the angle is larger than 138 degrees, and light reaching our eyes is mostly reflected light from the water drop's front surface. This region, being made up of all such rays, is thus brighter.