What causes the familiar 'red eye' on photographs?

'Red eye' results from scattering of light from the back of the eye (the retina). In such backscattering, light is reflected in the direction from which it came. The result is that the subject's eye appears to be illuminated from within.

What about cats, dogs, and other animals? Do they also have 'red eyes' too?

The effect is enhanced in cats, dogs and other animals which have good night vision, because they have a reflecting layer behind the retina. Human beings do not have such, but on occasion his eyes backscatter very well, for instance in photography.

How could 'red eye' be removed from photos?

It has been estimated that 'red eye' will occur when the angle of reflection is less than about 2.5 degrees.

Typically 'red eye' is removed in cameras with a red-eye flash mode. It uses a brief pre-flash to reduce the subject's pupils for the main flash.

There are other ways to remove 'red eye'. Look at the above figure again. One way is to use a separate, external flash which effectively increases the distance of the flash from the camera lens (> 2.5 degrees).

Can you think of any other ways? Look here.

Do you know that some people still give 'red eyes' even with the red-eye flash mode? Who are they?

They most probably are intoxicated, i.e. drunk, with a dulled response from their pupils. One more reason to stay sober.

Another effect, caused by a similar kind of backscattering (though by a different mechanism), is the 'glory'. Below is a photo of 'glory' taken from an aeroplane, showing the shadow of the plane on the clouds. Surrounding the centre are rings with blue on the inside and red on the outside. There have been observations elsewhere of these primary rings being accompanied by as many as three or four similar rings of larger diameter. 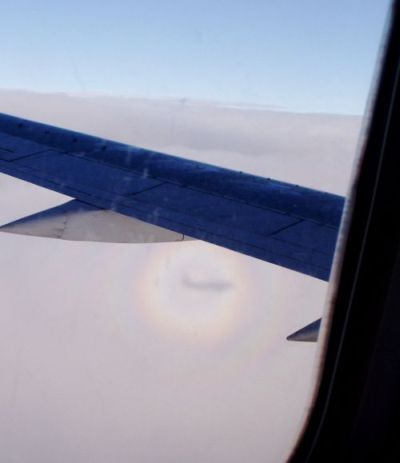 Experiment results suggested that these rings may result from backscattering from a water droplet (a cloud is made up of water droplets). 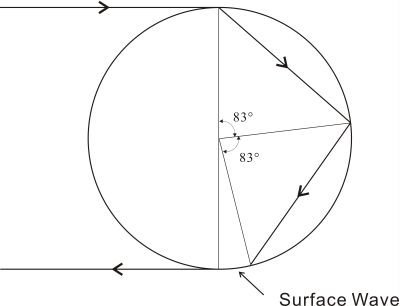 Here a light ray hitting the edge of a water droplet is reflected twice at an angle of about 83 degrees within the droplet. Thereafter it clings to the surface of the droplet and is conveyed the rest of the way around the droplet to the backward direction (180 degrees).

'Glory' may also be seen from a high point, e.g. on a high mountain, when there are clouds down below and the sun is behind you, projecting your shadow onto the cloud. You may be rewarded by the sight of a shadow of your head surrounded by coloured haloes. What is unique about the shadow, moreover, is that if someone else is with you, his shadow does not have such haloes. This is probably how the name 'glory' came about in the first place.