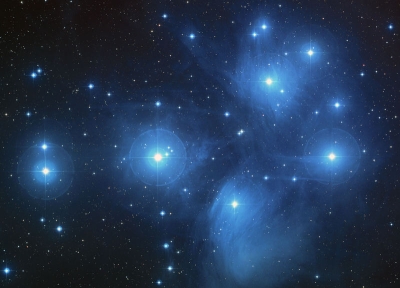 Since no astronaut while traveling in space has reported seeing stars twinkling, the effect must be atmospheric, i.e. due to air. However, it is not exactly correct to say that it is due to turbulence in the air.

Mere turbulence in the air is just what we call wind. Wind does not make stars twinkle, because light travels at a great speed --- over 1 billion km/h.

What distorts the light coming from a star is temperature variations in the air. As you probably know already, air temperature varies a great deal. It typically decreases by 6.5 degrees Celsius for every kilometre you go up, and this accords with the experience that it feels cooler up in the mountains. Also, on a hot day, you may notice the shimmering waves (thermals) that come off a heated road and make a distant car appear wavy.

But exactly how do temperature variations cause twinkling?

Why doesn't a big object like the sun or the moon twinkle?

For the sun or the moon, there are so many light rays coming our way that it does not matter some of them are scattered away, so long as the remaining ones are scattered towards us. So the image looks steady.

Then why doesn't a planet twinkle, since it is small enough to our eyes?

Planets are actually not so small as the stars, which can be treated as points of light. To show this, you don't need a telescope. A pair of binoculars is enough to show that they are not small. So they don't twinkle.

Thermals are unstable air caused by heating. Rising vertically, they may come from a sun-lit ground or off the sun-facing side of a mountain or cliff. Birds, such as eagles, are expert at exploiting thermals, gliding effortlessly in air by riding on them. In aviation sports, paragliders adopt the same principle.